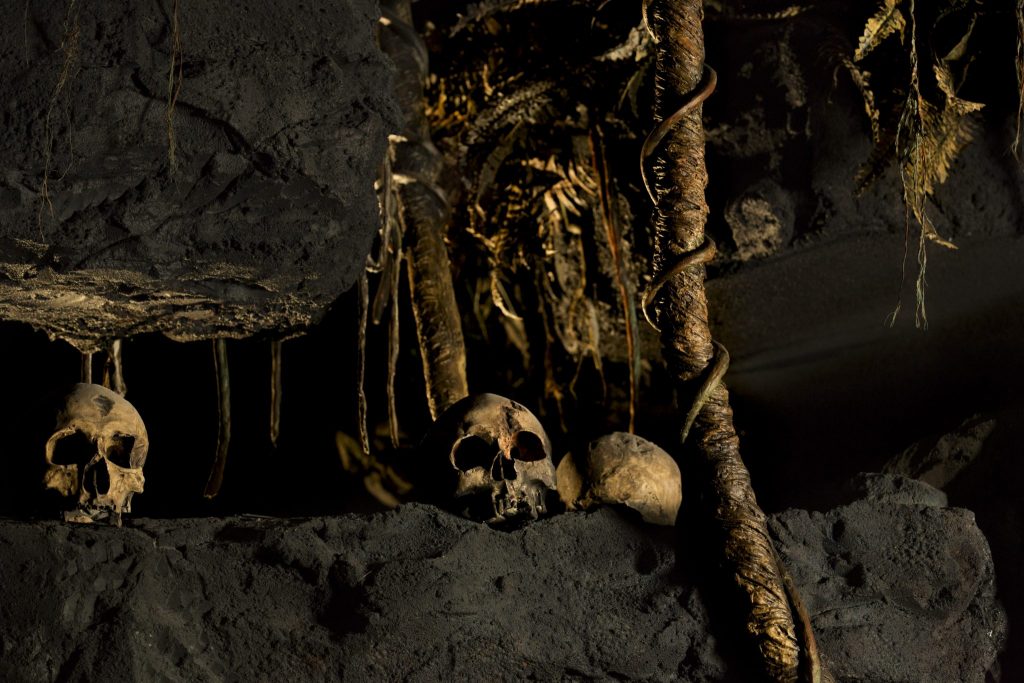 What We Know About Skull Island: Reign of Kong

Skull Island: Reign of Kong is just months away from officially opening and Universal Orlando has been using viral marketing strategies to advertise for the attraction. This summer, King Kong will awaken from his 13-plus year sleep after the closure of Kongfrontation at Universal Studios Florida in late 2002. Official news about a King Kong attraction came in 2015 when Comcast mistakenly announced the project in a quarterly earnings call; the resort hadn’t announced the project until a couple of months afterward. Since then, Universal has been slowly releasing additional details before the ride’s summer opening. 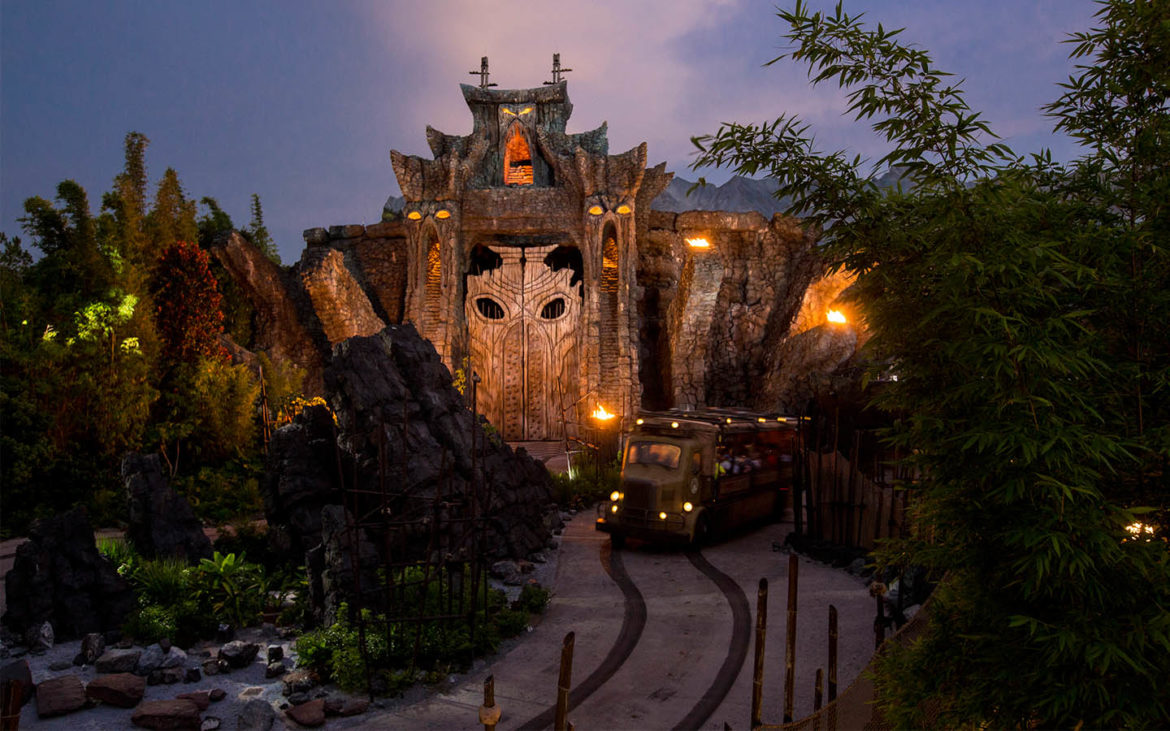 What We Know
The Storyline:
The overall story: The journey begins when you join the Eighth Wonder Expedition Company for a daring research trip to uncover the mysteries of Skull Island. Eventually, you board an expedition vehicle at the base camp and set off for the heart of the island to meet with the leader of the expedition. Moments later, you head through the massive doors of a temple where drums are beating and flames are rising. Then, you face a maze of caves where danger lurks around every bend. Following this, you narrowly escape the caves only to enter a jungle where you are to face yet another challenge. Suddenly, you are caught in a battle between colossal, ferocious creatures fighting for dominance. At that moment, King Kong appears but what does he plan on doing?

Additional details: At the boarding center, you will board a vehicle with one of five characters: Becky Callahan, Will Denham, Jinks Costanza, Kalana, and Charles “Doc” Jordan. Each character will have their own story to tell, offering a unique experience.

The Ride Vehicles: According to Universal’s announcement, the expedition vehicles that you will board measure over 40 feet long and 13 feet high, weigh about 70 tons, and can carry up to 72 guests. The front and back axles that support the vehicle’s 45-inch wheels can be steered individually to allow the vehicles to take sharp turns and pull off complicated maneuvers. 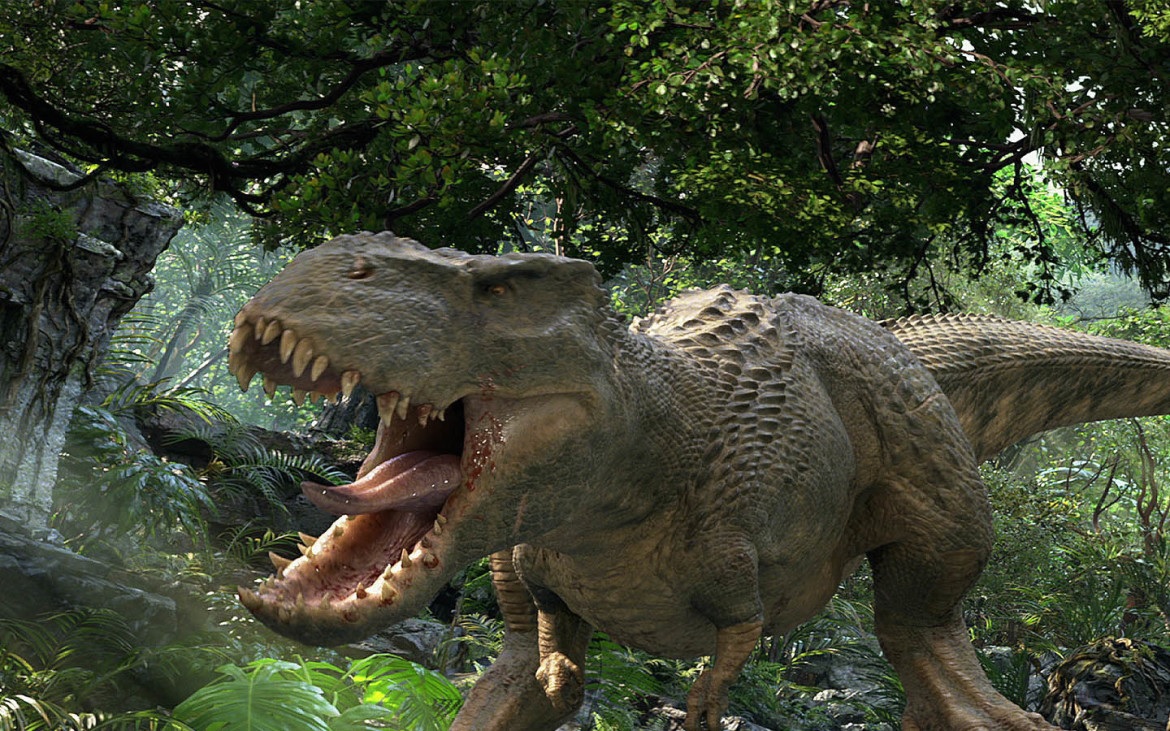 The Creatures: Universal Orlando revealed five creatures that you will come across while on Skull Island. One creature that was revealed was the Arachno-claw, which is a six-legged scavenger that uses its crab-like claws to crush its prey. Another creature is the Carnictis, a giant slug-like creature that lacks eyes and facial features but has a gaping, oozing mouth that’s ringed with sharp, jagged teeth that allow it to feed on dead and wounded beings. There is also an aggressive cave-dwelling inhabitant with razor-sharp mandibles and two-bladed forearms called theDecarnocimex. The resort also introduced the large flying Terapusmordax that has wingspans of up to 10 feet. Finally, comes the colossal Vastatosaurus rex, also known as the V. Rex. The V. Rex is the largest, most intimidating dinosaur on the island. Despite its large, bulky head and tough leathery skin, it’s an agile predator that can change directions at high speeds and rip into its prey with its razor-sharp teeth.

The Duration: Skull Island: Reign of Kong will be the resort’s longest ride with a duration of about five minutes and 50 seconds, according to Mike West, executive producer with Universal Creative.

The Ride System:
Bringing the experience to life: Through Universal Orlando’s website, it was made clear that the attraction will be in 3D, but it may not entirely focus on screens. Like Harry Potter and the Forbidden Journey, it is highly expected that Skull Island: Reign of Kong will combine the use of 3D technology and implement real life sets — and this can be justified by construction updates picturing a massive skull at the entrance of the towering temple, through Mike West’s own words in a trailer that was released in May of last year in which he stated “we have massive sets,” and partially through a statement in which he made clear that many of the outdoor scenes are actually indoors.

The vehicle technology: Mike West stated that Reign of Kong will be the resort’s first trackless ride. It was not announced how the ride vehicles will be controlled but it is clear that an employee will not maneuver the vehicles. This can be justified based on a video released by Mako Madness that shows Universal sending the ride vehicles into the temple with no driver on board. We expect actors to be on the ride vehicles playing the role of a driver but having little to no control over them. We believe that sensors will be used to guide the vehicles throughout the path based on the fact that small white objects that appear to look like sensors are located on the rock work and ride vehicles.

The Location: Skull Island: Reign of Kong is sandwiched between Jurassic Park River Adventure and Dudley Do-Right’s Ripsaw Falls. It’s unclear if the attraction will be located in its own mini “island.”

The Difference: Mike West made clear that the attraction will not be similar to Universal Studios Hollywood’s King Kong 360 3D or the King Kong films. He noted that Orlando’s ride will use some of the same elements that Hollywood’s version has in place but he insists that the two will be entirely different. Unlike Hollywood’s version which is a part of the Studio Tour, Orlando’s version will be a stand alone ride with a well developed and expanded story and a thematic environment that guests can actually enter. As for the upcoming film, they will both share the same setting but will not share the exact story.