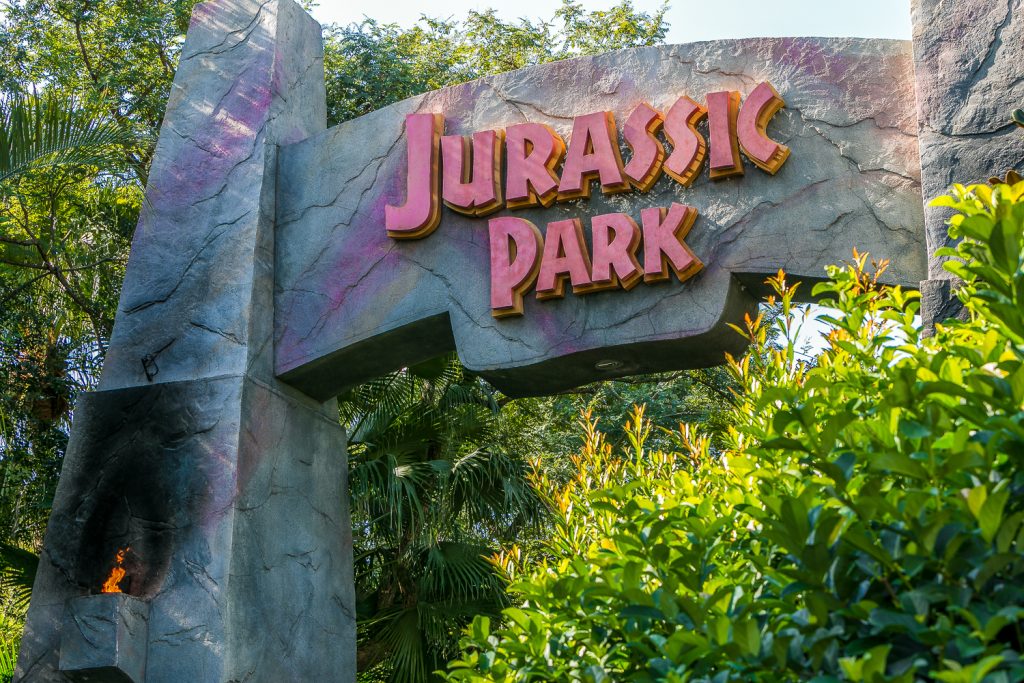 What Kind of Coaster Will Arrive in Jurassic Park?

In the summer, we discussed the future of the Jurassic Park area at Islands of Adventure and the possibility of a brand new attraction coming in the near future. The prevailing rumor going around is that a new roller coaster will make its way to Jurassic Park in the next few years. At the time that this rumor first broke, it was believed that the coaster may be a wooden one, but it seems like that rumor has shifted.

In this article, we will review evidence of a new roller coaster being built in the Jurassic Park area, what manufacturers Universal may be working with, and the projected timeline for the coaster’s completion.

Evidence
Earlier this year, Universal filed a permit for Project 791, which called for land clearing in the area formerly occupied by the Triceratops Encounter attraction. Since the permit was filed, survey markings have appeared in front of the Discovery Center building along the waterfront (for possible future coaster supports), and a construction fence can be seen from visitor walkways. On top of this, props from the Triceratops Encounter queue have shown up in the Williams of Hollywood shop (a.k.a. the prop shop) at the neighboring Universal Studios Florida park. For a while, it did seem as if progress slowed to a crawl on this project, but new rumors indicate that something new is arriving very soon. It is widely believed that the Raptor Encounter will be moved to a temporary location while construction begins on the tree line.

Manufacturers
As stated earlier, the original rumor for a possible new Jurassic Park coaster was leaning towards a wooden variation. Recent developments, however, are pointing to a much different kind of coaster. Many insiders have begun to believe that a new steel launched coaster will be built in the space Project 791 is slated for and that it will cross in front of the Discovery Center. Beyond just a launched coaster, it is believed that this proposed attraction may reach speeds of 70 mph, making it the fastest roller coaster at Universal. It is also said to have a heavier focus on high thrill factor rather than the theme. When we compile this information, two major coaster manufacturers come to mind: Intamin and Mack Rides.

Intamin
Let us begin with Intamin. The Swiss company is responsible for 22 different ride varieties, including some standout coasters like Kingda Ka (this is the second fastest roller coaster in the world) at Six Flags Great Adventure, Millenium Force (first coaster over 300 ft tall) at Cedar Point, and Universal’s own Escape From Gringotts (the first dark ride/coaster hybrid). Intamin has developed a relationship with Universal Orlando; they have manufactured coasters for the resort in the past, and they are also currently developing the new Harry Potter-themed coaster coming to Islands of Adventure in 2019. The model that seems to best fit what has been rumored is the Blitz model. This is essentially a high-speed ride utilizing Linear Synchronous Motors (LSMs) to propel trains along a magnetic field and a twisting track packed with near-miss elements and airtime hills. The best ride that encompasses what a Blitz model can be is Taron at Germany’s Phantasialand park (seen in the above video). The Taron coaster is the fastest and longest multi-launched coaster of its kind, reaching speeds well over 70 mph. This model does fit many of the rumored descriptions for the Jurassic Park coaster, and given the history between Universal and Intamin, it isn’t hard to believe they would be the one to create the ride.

Mack
It is also possible that building two Intamin launched coasters virtually right next to each other might not be feasible given the proposed timeline of a 2020 opening. Given this, another company comes to mind for the development of a new launched steel coaster. Mack Rides, a German company, has developed a multitude of attractions around the world, including Journey to Atlantis (this is a water flume/coaster hybrid) at various Seaworld parks, Icon at UK’s Blackpool Pleasure Beach (a multi-launched coaster), and Time Traveler (the first launched spinning coaster) at Silver Dollar City. Mack has begun to make a name for itself in the U.S., with more and more projects being developed stateside. Their newest coaster, Copperhead Strike at Carowinds (shown in the video above), is a multi-launched coaster featuring multiple inversions. It is possible that Universal will contract Mack Rides to create the rumored Jurassic Park coaster as Mack is known for more outlandish designs when it comes to rides. Mack’s growing presence in the U.S. is also something to keep an eye on as more and more American parks will begin ordering coasters from them.

Timeline
Many insiders think that this new Jurassic Park coaster will open in 2020, just a year after the massive Harry Potter project. The reason for the delay in progress may simply be due to all the other construction work going on throughout the resort, leaving a shortage of available building crews. Once the Harry Potter coaster is finished, all work should shift to Jurassic Park, and given that this ride won’t be too elaborately themed, a quick turnaround is very believable. As for the overall theme of this rumored coaster, raptors still seem to make the most sense, but anything is possible. The jury is also still out on whether or not this ride will have more of a focus on Jurassic Park or Jurassic World.

Regardless of which company designs and creates this new attraction, it will be a welcome addition to a park which lost two large coasters as a result of Dragon Challenge’s closure last year. A new high speed and high thrill based coaster in an area that is sorely lacking in rides is also a perfect fit. As time moves on, we should see more progress on this development, such as land clearing and additional construction fences. Until that time, stay tuned to worldofuniversal.com for the latest updates on the Jurassic Park coaster and more around the universe.

DISCLAIMER: This article is tagged as a rumor. Please be aware that the information in this report can change or may not have been planned at all. World of Universal shall not be held accountable for the accuracy of any rumors.