Universal Orlando Resort is a world-class vacation destination visited by millions of guests every year. The resort’s first theme park—Universal Studios Florida—exhibits what the Universal company is well-known for: films. Universal Studios Florida puts guests directly into blockbuster films as well as hit shows. It’s a theme park that’s designed for families to escape reality and enter a world where possibilities are endless; a world where families can make unforgettable memories that will last a lifetime. Universal Studios Florida doesn’t just feature highly immersive, innovative rides and attractions, but it also features incredibly detailed themed areas that truly immerse guests. These themed areas provide the perfect setting to capture your moments so that they can be saved, shared, and cherished forever. When at this destination, don’t just walk past everything in sight—capture photos at some of the best photo spots. 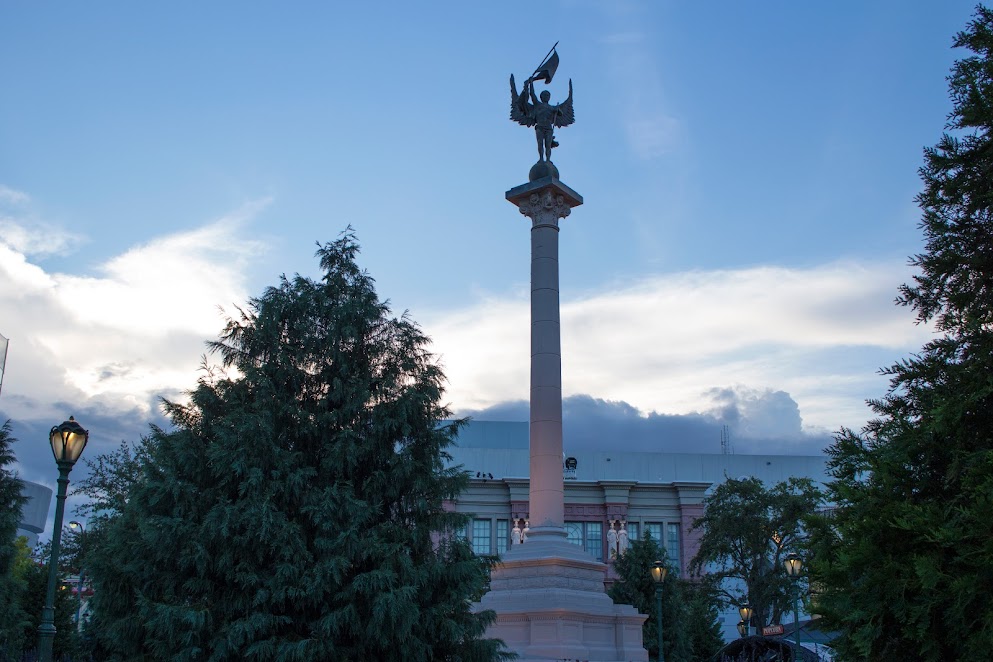 2. Gramercy Park
Universal Studios Florida features a replication of New York right in sunny Central Florida. Universal’s version is home to facades tied directly to films and television shows as well as currently standing structures and locations. Just about in the center of the area is Gramercy Park, home to a towering statue and wonderful greenery. This park is the perfect location to showcase a tranquil environment with the heart of New York directly in the background.

3. Race Through New York
The 30 Rock Tower recreation for the all-new Race Through New York Starring Jimmy Fallon ride is truly amazing. The original structure in New York City was completed in 1933, and to have such an iconic building right in Florida is beyond astounding. Universal’s recreation may not be as tall or as eye-dropping as the original, but it really does capture everything that makes the tower so great. The recreation even includes details directly from The Tonight Show set, including the recognizable marquee. Before or after riding the Race Through New York attraction, take a photo right in front of it at the corner seen above. The building is great for pictures at any time of the day! 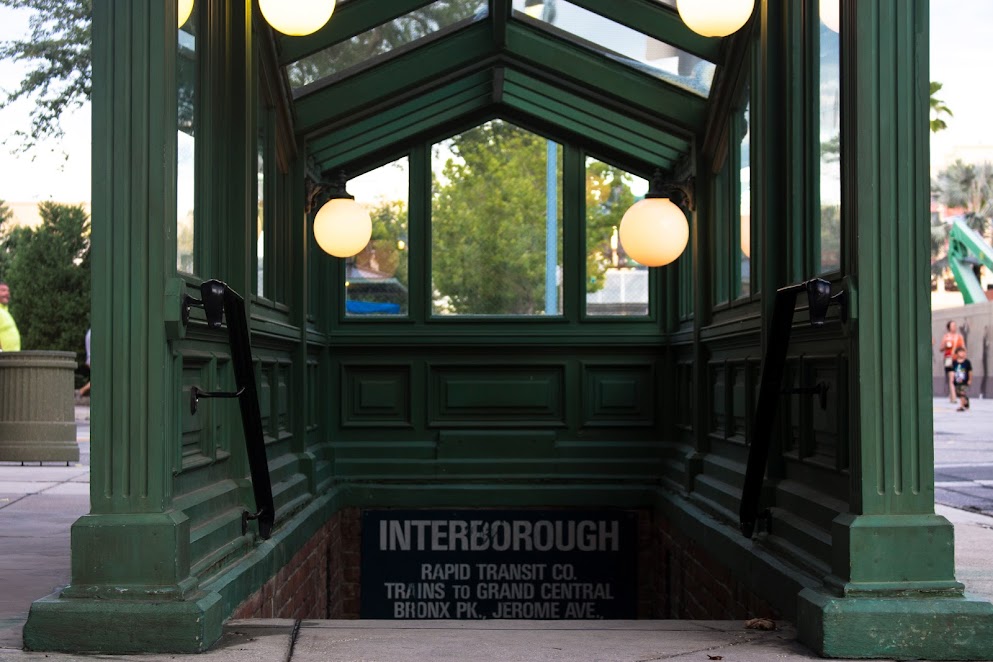 4. Subway station
New York isn’t just known for its towering structures, it’s also known for its subways that roam below the city that never sleeps. It’s almost as if the city is always active on land, in the sky, and even underground. Universal’s New York may not actually have a subway, but it does have a faux subway station that can be found at the very end of the main street (in the location where Hollywood Rip Ride Rockit races through the building connected to the Race Through New York ride). Any angle is perfect for a photo as long as you don’t position yourself at the very bottom of the station (this will ruin the effect and outright show that it’s not real). 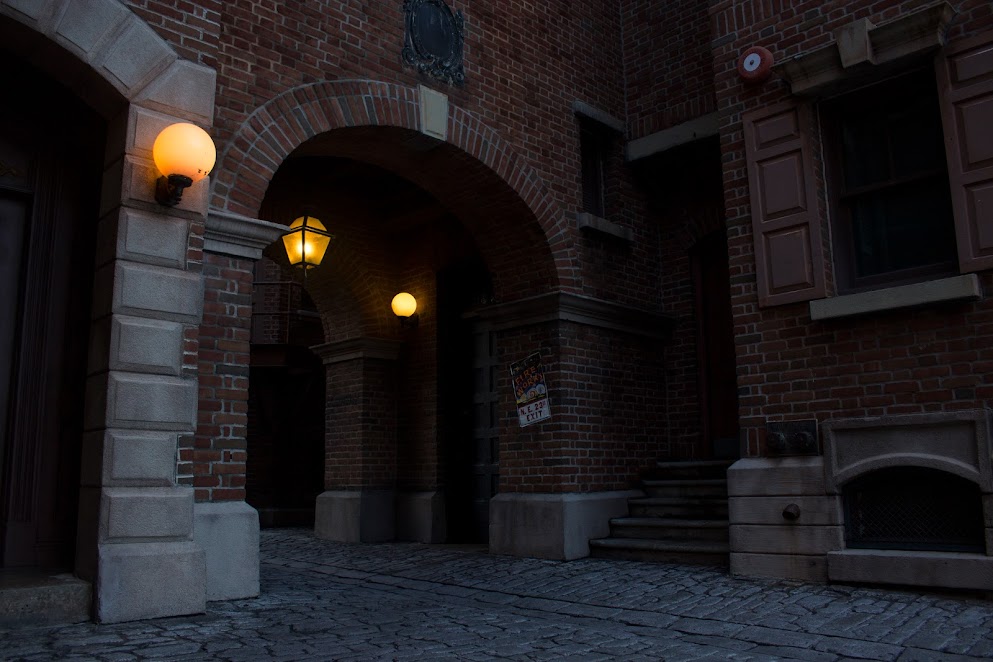 5. New York alleyways
The New York area of the park really does take everything the city is known for. If this is not the most picturesque location in Universal Studios Florida, it’s definitely near the top. One of my favorite areas here is probably the alleyways, and that’s because of every single detail Universal put into it, but that’s not the only reason. These alleyways are typically quiet because other guests either do not realize that they are permitted to enter the area, don’t realize it, or just don’t bother to walk through it. This makes it the perfect site to take a photo without people in the background. This area can be entered in several areas including just past the Revenge of the Mummy ride and at the lagoon area.

6. Optimus Prime
What better way is there to share your memories than with a shot of Optimus Prime? If you’re a Transformers fan, this is a prime location! You’ll see Optimus standing proud and tall as guests walk underneath to enter NEST. 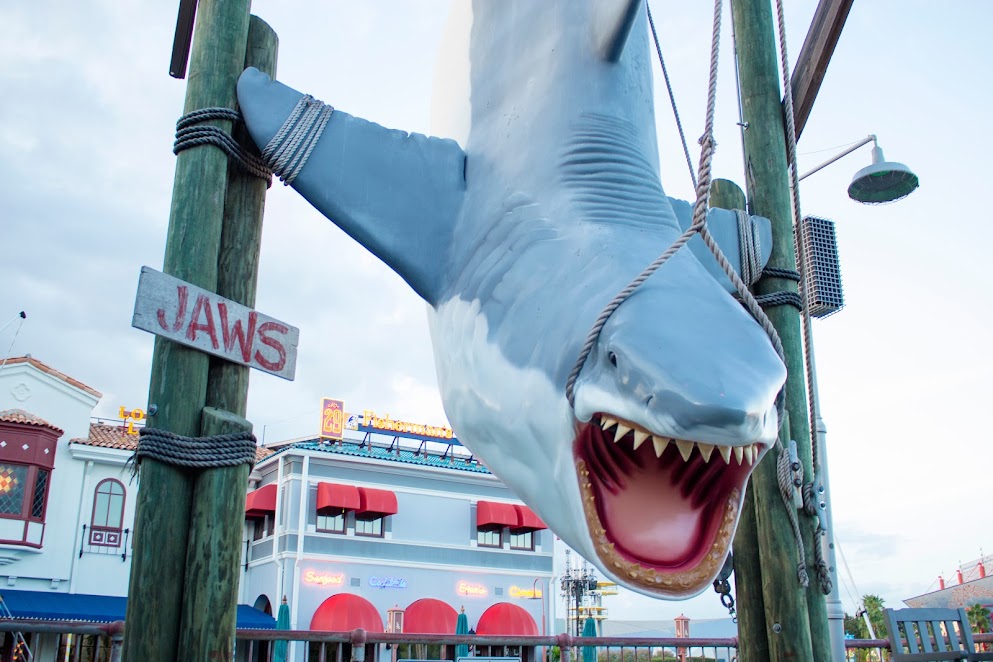 7. Jaws photo op
The Jaws ride may no longer be in existence, but the statue is still alive and well. It can be found in the San Francisco area of the park at the lagoon side; it may not be outright visible, but if you walk toward the Chez Alcatraz stand, the Jaws statue is located right behind it. Whether you liked the films or not, there’s no denying that this makes for a perfect photo. My favorite pose for this photo spot is when guests hold their body up by grabbing onto the rope in the shark’s mouth. 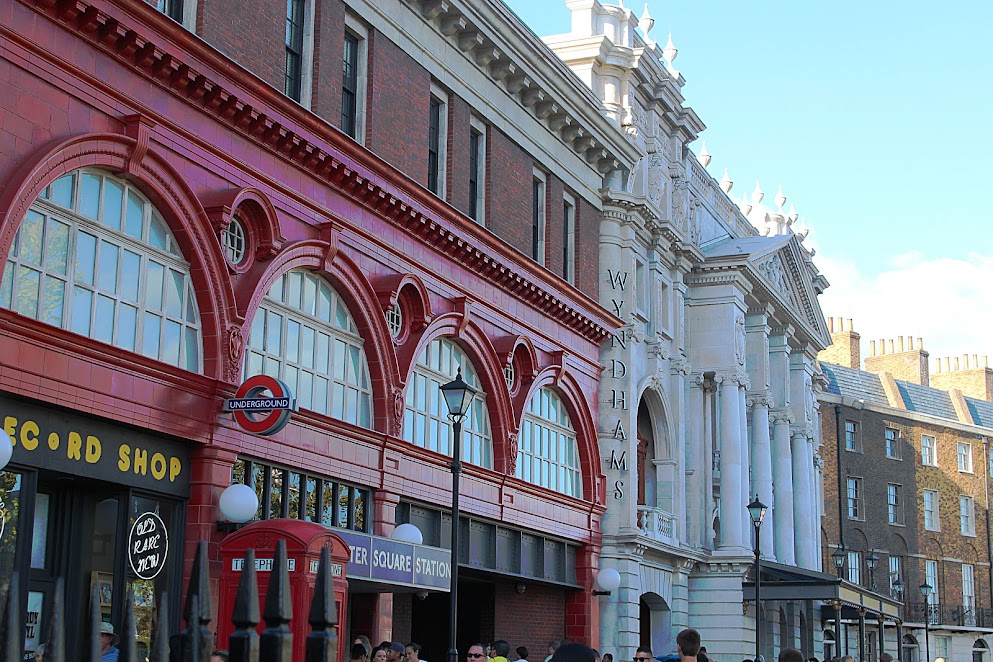 8. London waterfront
The London waterfront is simply awe-inspiring. The amazing details that Universal included in all of the facades gives the impression that you’re actually in London. It captures the sights and sounds that make the city so great, and it also makes for a fantastic photo spot because of this. My recommendation is to take your image of the London waterfront near the park’s lagoon so that you can better include all of the different structures, and if you’d like, it’s also best to take some close-up photos in the area.

9. Diagon Alley dragon
Enter Diagon Alley from the London waterfront and you’ll enter a magical world with a fire breathing dragon at the end of the alleyway. This dragon is truly breathtaking, so you won’t want to miss out on getting a photo with it. My recommendation is to take your photo with the dragon from the sides rather than from the front to better include the details of the dragon and to better hide the large crowds standing for photos. 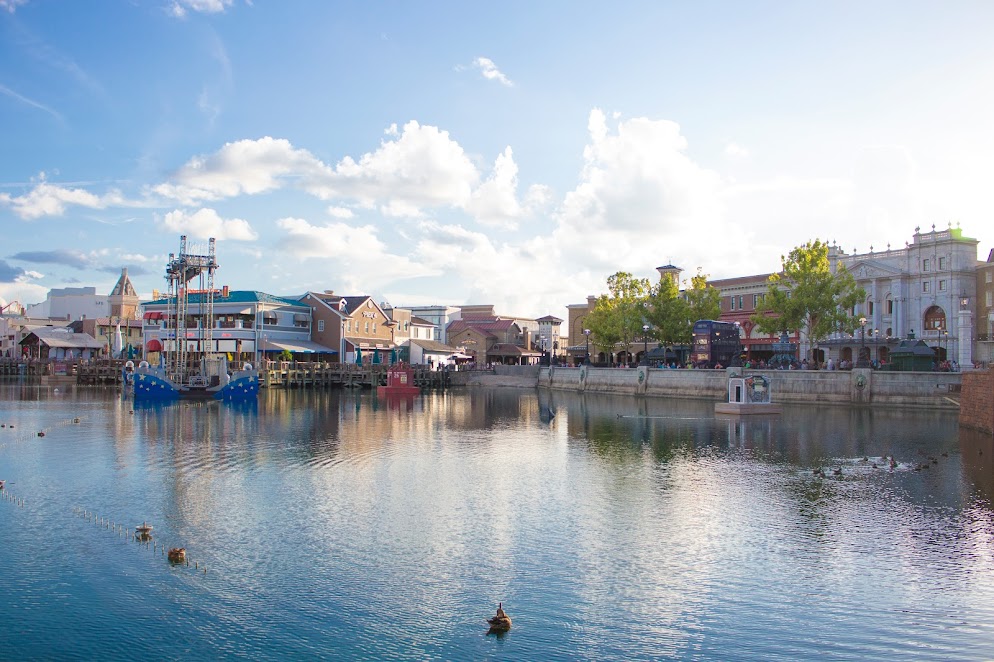 10. Universal Studios Florida lagoon
Universal Studios Florida’s lagoon is a prominent location to capture many of the park’s themed areas, including San Francisco, London, New York, etc. My preferred location for an image at the lagoon is to go on the bridge that leads from the London waterfront to the Springfield area. Here, you can capture the park’s most iconic areas, making it a great photo spot and a great way to remember your vacation. 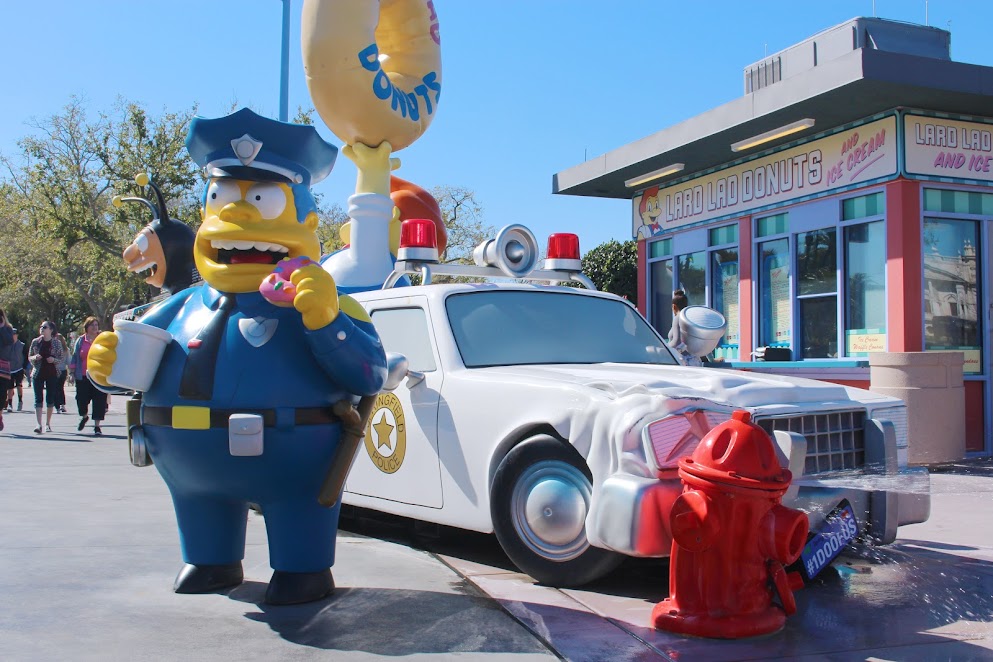 11. Chief Wiggums statue
The Springfield area of the park brings to life the city with the same name from the Simpsons show. This area features several statues to take photos with, but my favorite is the Chief Wiggums photo op because of its silly nature and numerous props. This photo op shows the Chief eating a Lard Lad donut (with the store and statue in the background) all while his police car is smashed by a fire hydrant. One of my favorite poses with the Chief is when guests pretend to eat the donut out of his hand, though whatever pose you select, it’ll make for a lovely vacation memory. 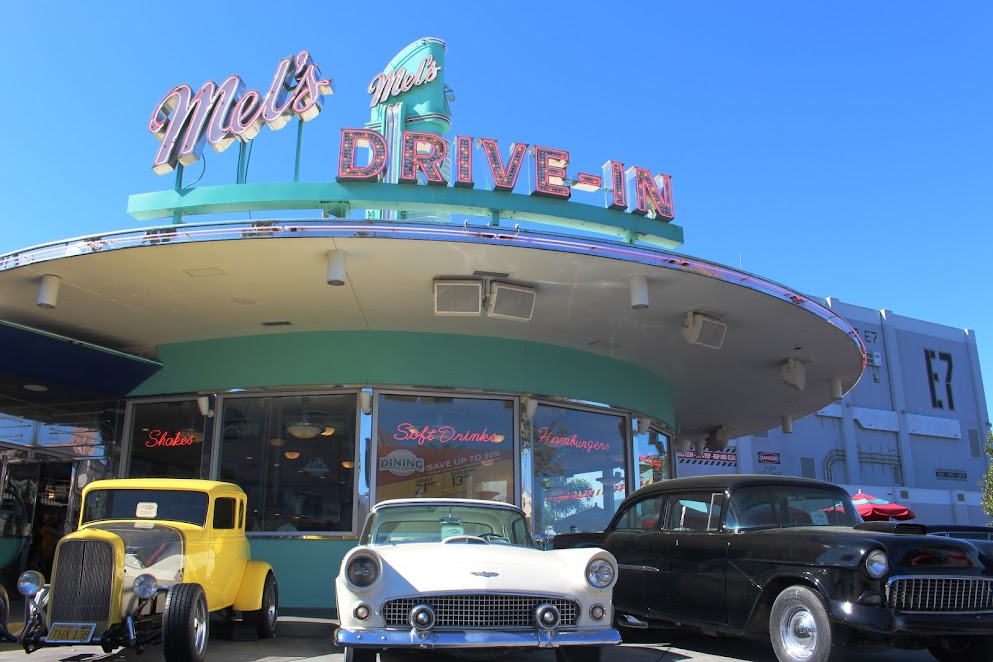 12. Mel’s Drive-In cars
A photo in front of a restaurant may not seem like much, but it actually is. The restaurant in the above image perfectly captures the old Hollywood look with the classic cars included (the park typically places classic cars around the restaurant). For this reason, this is my favorite photo spot in the Hollywood area.

Universal Studios Florida features countless distinct photo spots, and this is only a short list of them all. When in the park, take a photo with anything that stands out to you most, but don’t forget to capture a shot at the locations listed in this post. Happy photo shooting!