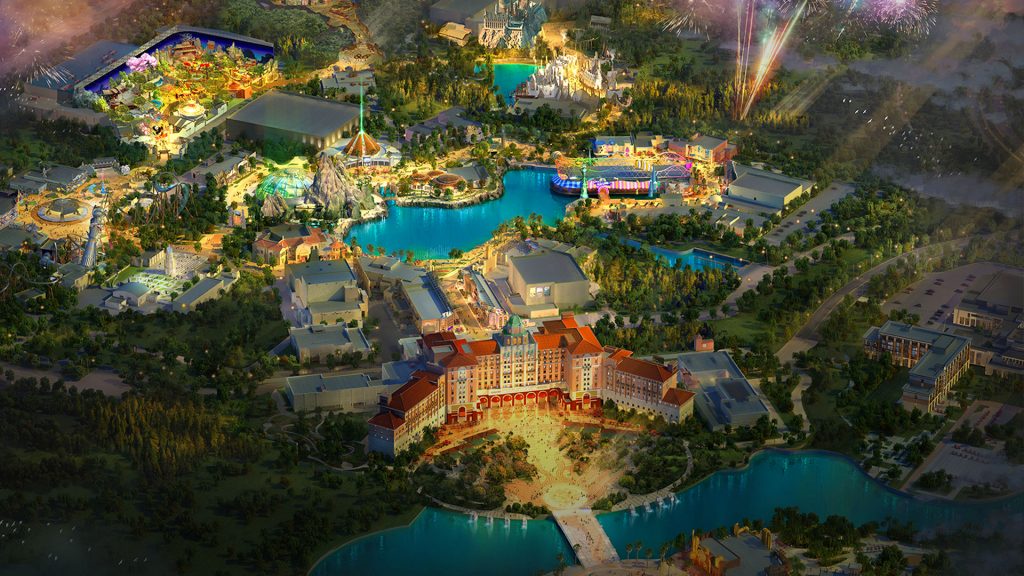 The resort will feature two on-site hotels, a new twist on the Universal staple of CityWalk, and of course, the Universal Studios Beijing park—all of which are set to open in 2021.

Starting with the hotels, Universal Beijing will feature the Universal Studios Grand Hotel, a call to the Golden Age of Hollywood. The Universal branded hotel will immerse guests in Universal’s century-long contribution to the movie industry and celebrate the Golden Age by surrounding guests with authentic film decor and details. Serving as the main entrance to the theme park, guests staying in this movie-inspired hotel can get stunning views looking into the park and the surrounding resort. From the architecture shown below, it is easy to see how this hotel earned its “grand” name.

NUO Resort Hotel will serve as Universal Beijing’s second on-site hotel. Borrowing from aesthetics of Asian style and design, this resort will offer a more luxurious feel, complemented by a series of lush gardens between the hotel towers. The NUO Resort Hotel, which lies just beside the park’s waterway, is intended to represent a tranquil island, creating the feel of a private retreat.

Just as is the case at other Universal destinations, CityWalk is the place to go for on-site dining and entertainment. This version of the area features some popular venues found all around the world, such as Toothsome Chocolate Emporium and Cowfish. Local well-established brands with new concept stores will also join the lineup of venues at CityWalk. Universal Beijing hopes that the local brands will give a strong boost to their wider market presence while providing another unique experience brought by cultural fusion. More details about Beijing’s CityWalk can be found in our earlier article here.

Universal Beijing released a video showcasing all of the unique areas and attractions their theme park will have to offer.

The park will be made up of seven distinct lands: Kung Fu Panda Land of Awesomeness, Hollywood, WaterWorld, Transformers Metrobase, Minion Land, The Wizarding World of Harry Potter, and Jurassic World Isla Nublar.

At the Kung Fu Panda area, guests can traverse the pristine valley of peace from the movies and meet their favorite characters in this first-for-Universal all indoor land.

WaterWorld will bring the classic Universal stunt show to China. Guests can expect harrowing fights, fire and water effects, exciting action, and even a full-size plane landing in the middle of it all.

Hollywood is the classic land found in every Universal park around the world, but this version has a few surprises. The main street is covered, much like in Universal Studios Japan and Universal Studios Singapore; this will keep guests shielded from the sun and rain. The land will also feature a Lights, Camera, Action show, which displays practical effects in movies and guest appearances by the legendary Steven Speilberg and acclaimed Chinese director Zhang Yimou.

Transformers Metrobase is the first land in a Universal park entirely devoted to the robots in disguise. Here, you can take a spin on Bumblebee Boogie, join the fight against the Deceptions on Transformers: Battle for the AllSpark, or if you’re brave enough, you can come face-to-face with Devastator and ride the intense and thrilling Decepticoaster.

Minion Land brings the zany and colorful world of Illumination’s Minions characters to life. The land will feature a full neighborhood from the movies, a large pier full of family-oriented attractions, and a live stage show featuring the characters from the Sing animated film.

Fans of magic will flock to the newest version of the famed Wizarding World of Harry Potter. The land, like all of the others featured at Universal’s parks, will whisk guests to the small town of Hogsmeade where they can enjoy all kinds of magical shops and eateries. Guests will also have the chance to journey into Hogwarts Castle and board the world-famous attraction Harry Potter and the Forbidden Journey.

Universal Beijing Resort is a one-of-a-kind destination that will introduce exciting experiences when it opens in the first half of 2021. Be sure to stick to worldofuniversal.com for the latest updates on Universal Beijing and all of the other exciting developments in travel and entertainment.