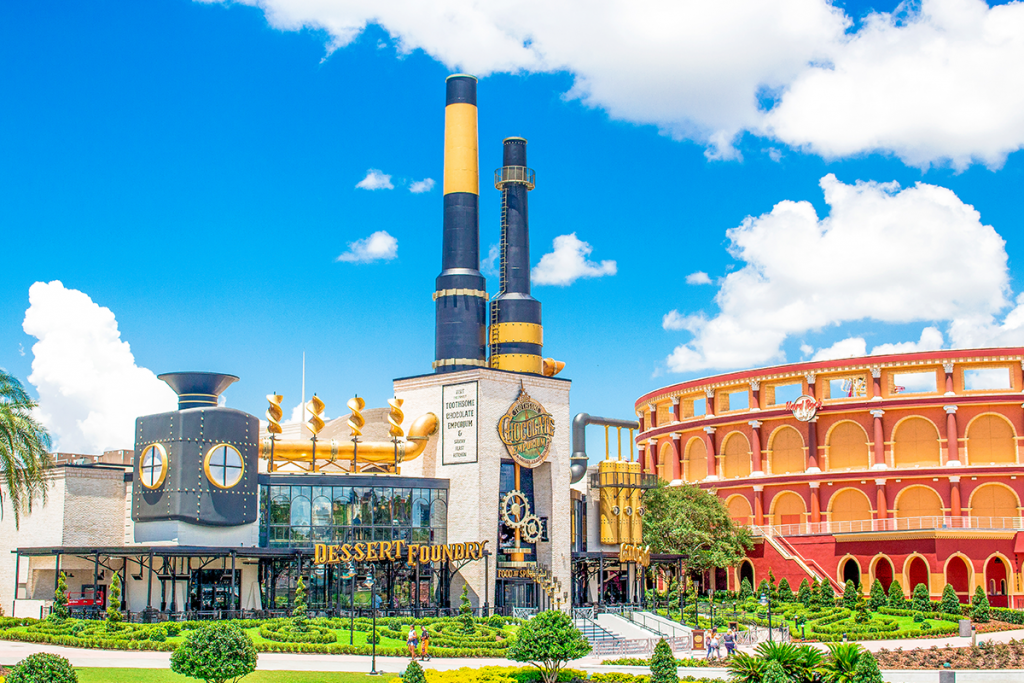 Shop, dine, party, golf, jam out, or watch the latest movie at the Universal CityWalk complex…or just dine! CityWalk Orlando is the entertainment capital of Orlando. It’s home to some of the best restaurants in the city of Orlando, consisting of more than two dozen dining locations in just one location. Though there are many great restaurants in the complex, including Jimmy Buffett’s Margaritaville, Bread Box Handcrafted Sandwiches, and Red Oven Pizza Bakery, there are several locations that are a MUST try, and not just because of their tasty meals but also because of their themed environments and affordability.

Toothsome Chocolate Emporium and Savory Feast Kitchen is a relatively new restaurant in the CityWalk complex. The restaurant is themed to look like an enchanting 19th century, Steampunk-inspired establishment. It features towering smokestacks, operational gears, an interior adorned with intriguing gadgets and gizmos, and even roaming characters to add to the ambiance.

Sushi Burger Bar? Strange? You may be thinking… Though it may indeed seem like a strange concept, The Cowfish is actually one of the top dining locations in the complex, offering a one-of-a-kind dining experience and unusual but amazing food. The Cowfish is the first and only Sushi Burger Bar, focused on offering both the best sushi AND the best burgers in town. This dining location provides a sophisticated experience in a modern, lively environment.

Here, you can order a burger, such as the C.B.C.L.T., the Dynamic Duo, the Texas Longhorn, The Cowfish Has Officially Left The Building, The Boursin Bacon Burger, and The Heavenly Veggie just to name a few. You can also choose from a variety of bento boxes and rolls, including the All-American Bacon Double Cheeseburgooshi, Doug’s Filet Roll, and the Taste Explosion Roll. Sashimi and milkshakes are also a staple at The Cowfish. Whatever you may order, whether it be a burger or sushi, is made all-natural, never frozen, adding bold flavors and fresh ingredients to create a unique, tasty dish.

Just beyond CityWalk’s Hot Dog Hall of Fame rests Antojitos Authentic Mexican Food, and as the name suggests, the Mexican food is authentic. At Antojitos, you’ll only find the best of the best, made-from-scratch dishes. Antojitos’ menu includes Mexican favorites like tacos, empanadas, and fajitas with traditional creations. Antojitos Authentic Mexican Food truly serves delectable, mouthwatering food in a magnificent environment, surrounded by colorful decor and the sounds of a live Mariachi band, making for a truly authentic experience.

No “top restaurants” list is complete without the Hard Rock Cafe. Located across the lagoon and adjacent to Toothsome Chocolate Emporium, the Hard Rock Cafe is a fan favorite and an original dining location, existing at the resort since before CityWalk even opened. Even better…CityWalk Orlando’s Hard Rock Cafe is the largest in the world! Here, you can grab a meal and a side of rock ‘n’ roll history as non-stop music videos continuously play throughout the restaurant whose walls are adorned with an amazing collection of rock memorabilia, including rare artifacts from KISS, Elvis, The Beatles, Bob Dylan, and more.

If the food isn’t enough, perhaps the restaurant’s piece of history and behind-the-scenes tour will be. If you head to the very back of the Hard Rock Cafe on the right-hand side of the building, you’ll come across the infamous symbol of the Cold War: the Berlin Wall. This iconic structure divided the east and west sections of Berlin to keep Germans from the communist East from fleeing to the non-communist West. The wall was symbolically brought down in 1989, leaving only a few parts of the wall remaining. In addition to this historic piece, the Hard Rock offers a unique tour known as the VIBE Tour, just ask a host between 2 PM and 9 PM (except on concert days at Hard Rock Live). The tour is absolutely free and gives you access to tour props, memorabilia from rock legends, drawings, photographs, records, and furniture, including a chair John Lennon used to sit on when drafting his songs.