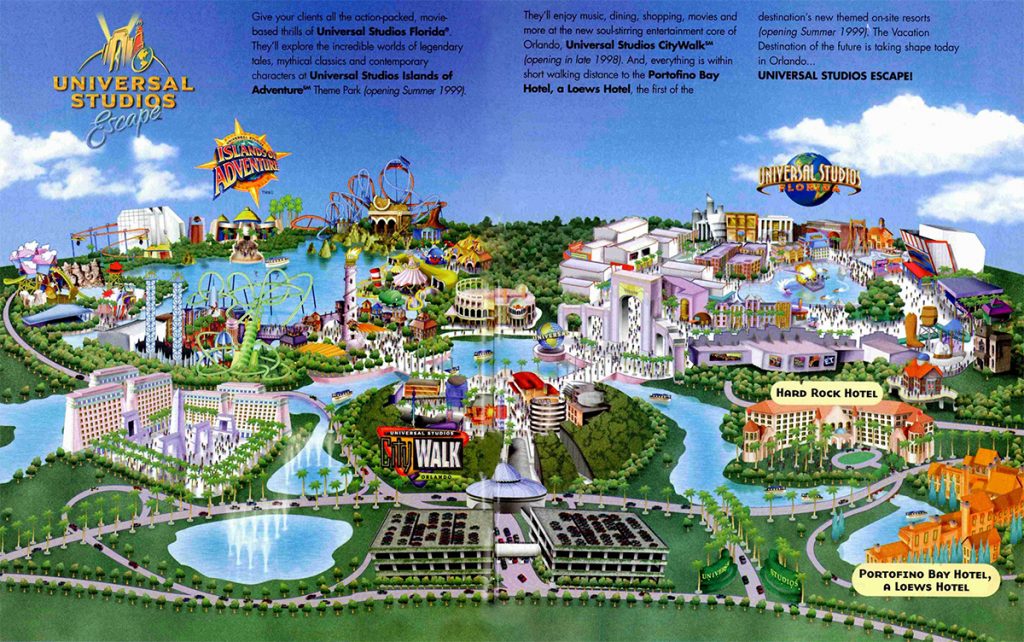 Universal Studios has been the home to some of the world’s most unique and thrilling attractions. Many of them feature groundbreaking technology and are themed to very popular intellectual properties. These rides take years upon years of designing and planning to bring to life. When the designing process is underway, many rides have to evolve through numerous changes to get to their current state, so it comes to no surprise that some attractions never left the stage of planning. In this article, we will be focusing on the top experiences at Universal Orlando that never saw the light of day.

Royal Egyptian Resort
To kick off our list we begin with a long lost hotel concept. Back when Universal Studios began planning their upgrade into a multi-­park resort, they had envisioned multiple hotels and even an eighteen hole golf course on-site. While most of these concepts did eventually come true like the Portofino Bay Hotel, etc., perhaps the most intriguing was the Royal Egyptian Resort. As the name implies, the hotel was supposed to be a heavily themed complex designed to look like a Pharaoh’s palace. The “Royal” moniker not only fit well with the theme, but it was later adopted for the hotel that eventually occupied that land—Loews Royal Pacific Resort. The hotel was planned to coincide with the blockbuster success of the Mummy film franchise and provide an “adventure destination” for guests. The Royal Egyptian Resort was featured in an early 1990’s promotional material for Universal, but that was as far as it got. Changes to the overall plan and budget transformed the idea into the current Royal Pacific Resort we see today. 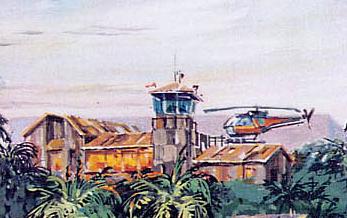 Jurassic Park HelicopTours
Next on our list is one of a long line of never realized Jurassic Park attractions. The original concept art for the land has a very similar looking Jurassic Park to what we see today. The major difference, however, is a large ranger station adorned with a helicopter at the sitting atop. This would have been home to the HelicopTours attraction. Advanced for the time, this flight simulator would have traveled over Isla Nublar, dinosaur paddocks, and even feature an attack by a group of Pteranodons. Interestingly enough, this concept came years before EPCOT’s ever popular Soarin’ attraction.

Van Helsing
In the early 2000’s, Universal began working on a concept for a Van Helsing themed ride that would have tied into the studio’s new film at the time. Guests would have boarded special ride vehicles and go through a massive soundstage filled with both animatronics and screen portions. Despite the technology not having been perfected, the most interesting aspect of this ride is its similarity to the technology used for the Wizarding World’s Hogsmeade E-ticket ride—Harry Potter and the Forbidden Journey. In fact, the same KUKA robotic arm used for Potter was envisioned for this ride, and it was even planned for the same plot of land, as an annex of The Lost Continent. Several rumors circulated the ride’s demise, including the film’s not-so-successful run in theaters. 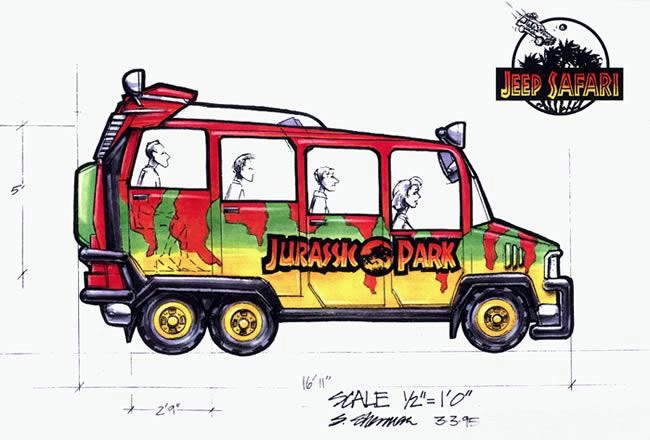 Jeep Safari
Perhaps the most famous of these abandoned ride concepts is the Jurassic Park safari ride called the Jeep Safari. As a part of the expedition, guests would board the famous red and yellow trucks from the Jurassic Park film and traverse the landscapes of Isla Nublar. The ride would have featured a large outdoor portion with animatronics comparable in size to those in Jurassic Park River Adventure. The truck would then be forced off the road and into an indoor portion, which would have featured a raptor attack. Multiple pages of concept art reveal the ride’s path, station, truck design/scale, and the overall theming, which makes it more iconic than most concepts. This ride was eventually abandoned due to its similarity to River Adventure. 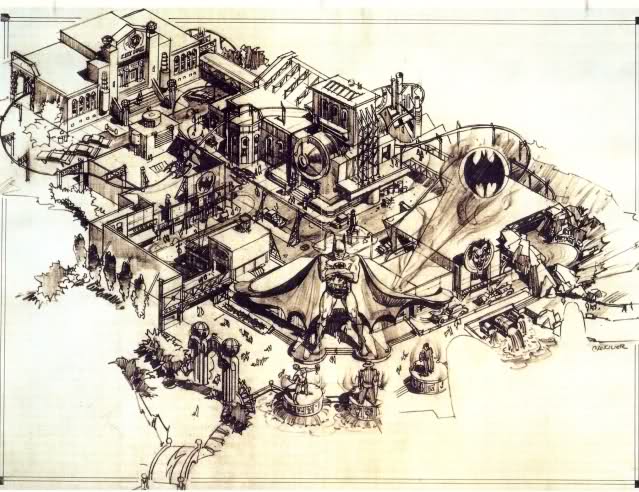 Gotham Island
No, your eyes aren’t deceiving you. When Universal Studios had begun planning their second theme park next door to the Studio park, they decided to use animated characters as their focus, naming the new park concept “Cartoon World.” One of the areas planned was an entire island themed to Batman. At the time, both Marvel’s and DC’s licenses were up for grabs. Universal had begun the concept of “Gotham Island,” which was heavily inspired by the then brand new Tim Burton Batman films. The island’s entrance was planned to have a five story tall statue of the dark knight himself with a bat signal shining high in the sky. Several major attractions were slated for this island including the headline ride “Batcar Interactive Dark Ride.” On it, guests would have boarded special Batcar vehicles and fight crime in the Axis Chemicals plant. Other ideas included a Batman & Robin show and a dueling suspended coaster concept which pinned Batman versus the Penguin. The main difference between this “island” and other theme park lands at the time was the immersive experience. Much like Diagon Alley today, this concept would have put you right into the heart of Gotham City; it was rivaled by no one in the industry. The negative reviews of forthcoming Batman films and the Six Flags acquisition of the DC comics license likely killed this idea and lead to Universal striking a deal with Marvel Comics in what we now see as Marvel Super Hero Island. Had things played out differently, this surely would have been one of the most interesting theme park lands ever built.

This article was originally published on March 29, 2016.