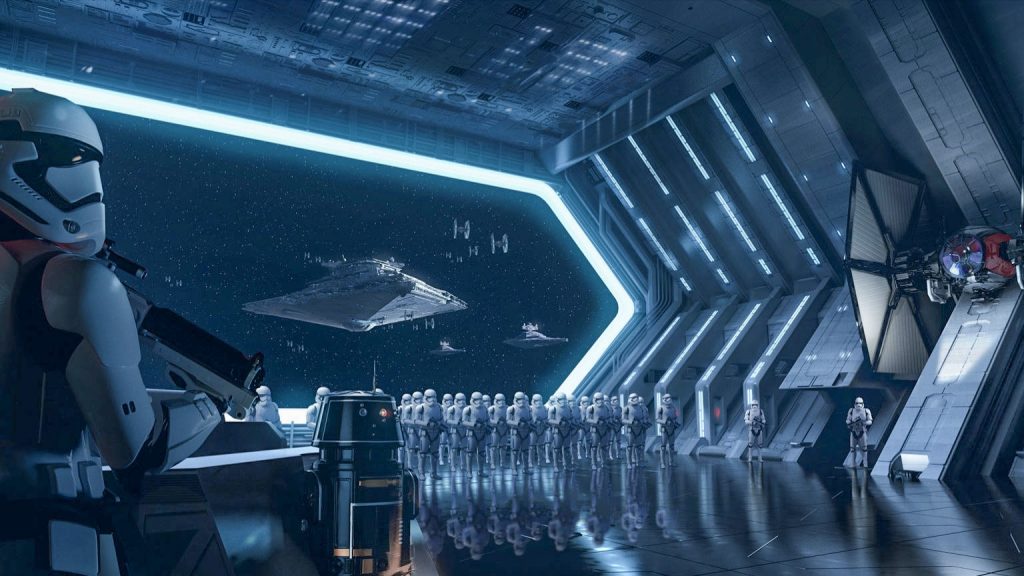 Welcome to our second installment in our top 5 series for 2019.

In the last few years, we have seen incredible new attractions, hotels, and additions to theme parks all around the globe, and that trend will continue this year as some new and very exciting projects will debut.

A few days ago, we covered our top 5 Universal Park additions for this new year. Today, we are going to shift focus to Disney parks around the globe and everything they have coming for the calendar year. We have compiled the list in a top five format, starting with five and working down to number one. Here are the top five Disney parks projects for 2019:

As part of a grand plan to revitalize Epcot, Disney announced a slew of new projects coming soon to the park. One of those ideas is a space station-themed restaurant that will give the illusion that guests are in orbit, courtesy of a 250 foot wrap-around projection screen. The restaurant, currently being referred to as “Space 220,” will be located adjacent to the Mission: SPACE attraction and is slated to open sometime in 2019, although details are sparse.

Perhaps the most unique entry in this list is Walt Disney World’s newest resort transportation system dubbed “The Skyliner,” set to debut this year. The Skyliner is a gondola style system that will shuttle guests in the air around several stations located within the resort. There are stations located at Epcot, Hollywood Studios, the soon-to-be-opened Riviera Resort, Caribbean Beach Resort, and the Pop Century and Art of Animation hotels. Each station is uniquely themed with architecture from its location, and each gondola will be decorated with Disney character artwork. The Skyliner is expected to begin running in fall of this year, marking Disney World’s first time implementing a new transportation system that doesn’t rely on automobiles (the monorail launched when Magic Kingdom opened in 1971).

Ant-Man and The Wasp: Nano Battle is part of Hong Kong Disneyland’s massive multi-year expansion. The ride will take guests on a micro adventure fighting off a swarm of evil Hydra bots. This attraction will be located next to Hong Kong Disneyland’s other Marvel ride, the Iron Man Experience. This ride is part of a large scale Marvel themed land the park has planned. This new attraction took the spot of the Buzz Lightyear Astro Blasters ride and is expected to use similar technology. Ant-Man and The Wasp: Nano Battle will open March 2019.

Disney’s first-ever Mickey and Minnie themed ride is arriving to Hollywood Studios in 2019. This state-of-the-art attraction will utilize technology Disney dubs as “2 ½ D” (essentially 3D without the need for glasses) to take guests on a wild and zany adventure through the world of a Mickey Mouse cartoon. The animation style is based on the new Mickey Mouse shorts, which actually takes the style of the older Mickey cartoons. Mickey’s long history and relevance in today’s society will surely provide a timeless feel for guests of all ages. This new ride is taking the place of the former Great Movie Ride situated inside the park’s Chinese Theater replica. As part of a promotion for the ride’s opening, Disney unveiled a new logo to celebrate Hollywood Studios’ 30th anniversary. The new logo features the iconic duo—Mickey and Minnie—in the zero of the 30.

The grandest of any Disney expansion in history is Star Wars: Galaxy’s Edge, a whole new themed land that brings the Star Wars franchise to life. This long awaited development will finally debut this year at both Disneyland in California and Hollywood Studios in Orlando. Guests will be whisked away to the remote Black Spire outpost located in the far reaches of the galaxy in a location never seen in any Star Wars film before. There, park goers can take a flight onboard the infamous Millennium Falcon and have unique flight crew roles in Millennium Falcon: Smuggler’s Run or aid in a battle against the evil First Order and come face-to-face with Kylo Ren in Star Wars: Rise of the Resistance. Beyond two original attractions, the land will have highly immersive theming and unique storytelling, bringing with it a wide variety of “inhabitants,” like droids, Storm Troopers, aliens, and much more. From a design standpoint, Galaxy’s Edge is unique due to its height; the land is full of giant spires made to look like petrified redwood trees. The sheer scale of this project can best be appreciated from the air. This land is, without a doubt, going to be the most popular addition to open at any park this year and will thrill Star Wars fan for years to come. Disneyland’s version will open in summer of 2019 and Hollywood Studios will follow in fall, right in time for the debut of Episode IX.

This concludes our list of the top five Disney parks additions for 2019. As each of these projects near completion, we will be sure to provide updates. We will soon complete our top five series with a look at the SeaWorld family of parks. Stay tuned to worldofuniversal.com for the latest in theme park and entertainment news.