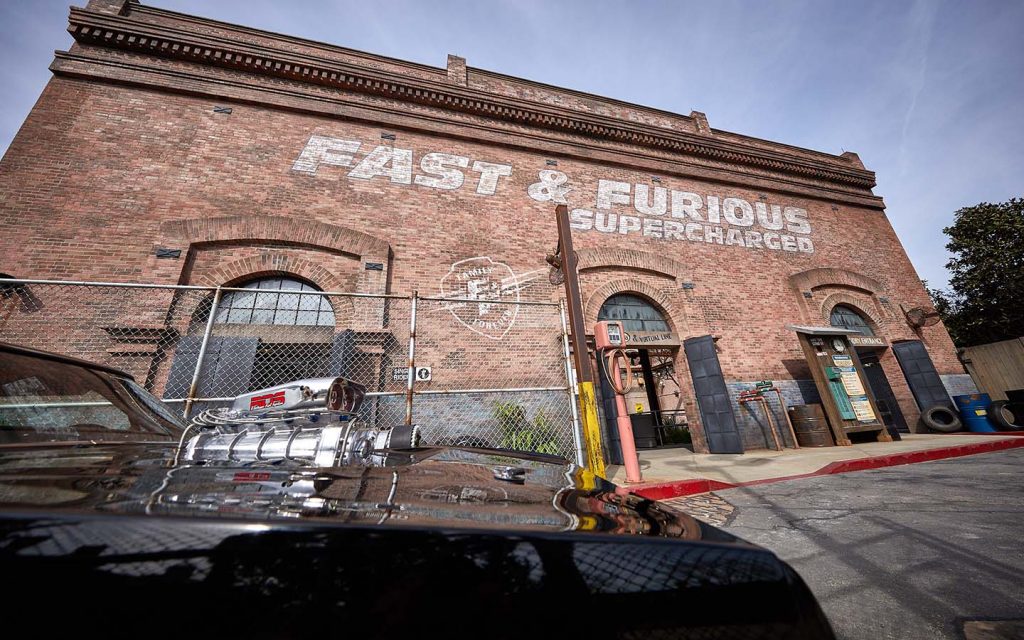 Last week, Universal Orlando Resort officially opened its newest attraction, Fast & Furious – Supercharged, to the public. This experience places guests right into the heart of the fast-paced world of the Fast & Furious films. Over the last few weeks, the ride has been operating in what is known as technical rehearsal, which means that at any point the attraction may not be fully operational and may only allow guests on at certain times throughout the day with no warning. Luckily, World Of Universal staff writer, Tyler Murillo, was lucky enough to catch a ride on Fast & Furious: Supercharged a day before the official opening. This review will be broken into four categories: Queue, Storyline, Ride Experience, and Overall Opinion, as well as a brief synopsis of the attraction. Queue
Fast & Furious: Supercharged is located in the San Francisco area of Universal Studios Florida. Upon walking up to the attraction, guests will immediately notice the run-down brick warehouse that serves as the main entrance. It is modeled after the famous Oriental Warehouse located in the city, and it really ties the whole area as a whole together. It is important to note that this attraction does have several options when it comes to lines. Single rider, express, and a regular standby queue are all available; however, there is also a virtual queue option. The virtual line is exactly like Race Through New York in that guests can walk up to a designated kiosk (or use the Universal Orlando app) to select their party size and return time to ride the attraction. The kiosks were available when I was at the park, but the return time tickets were not in operation. 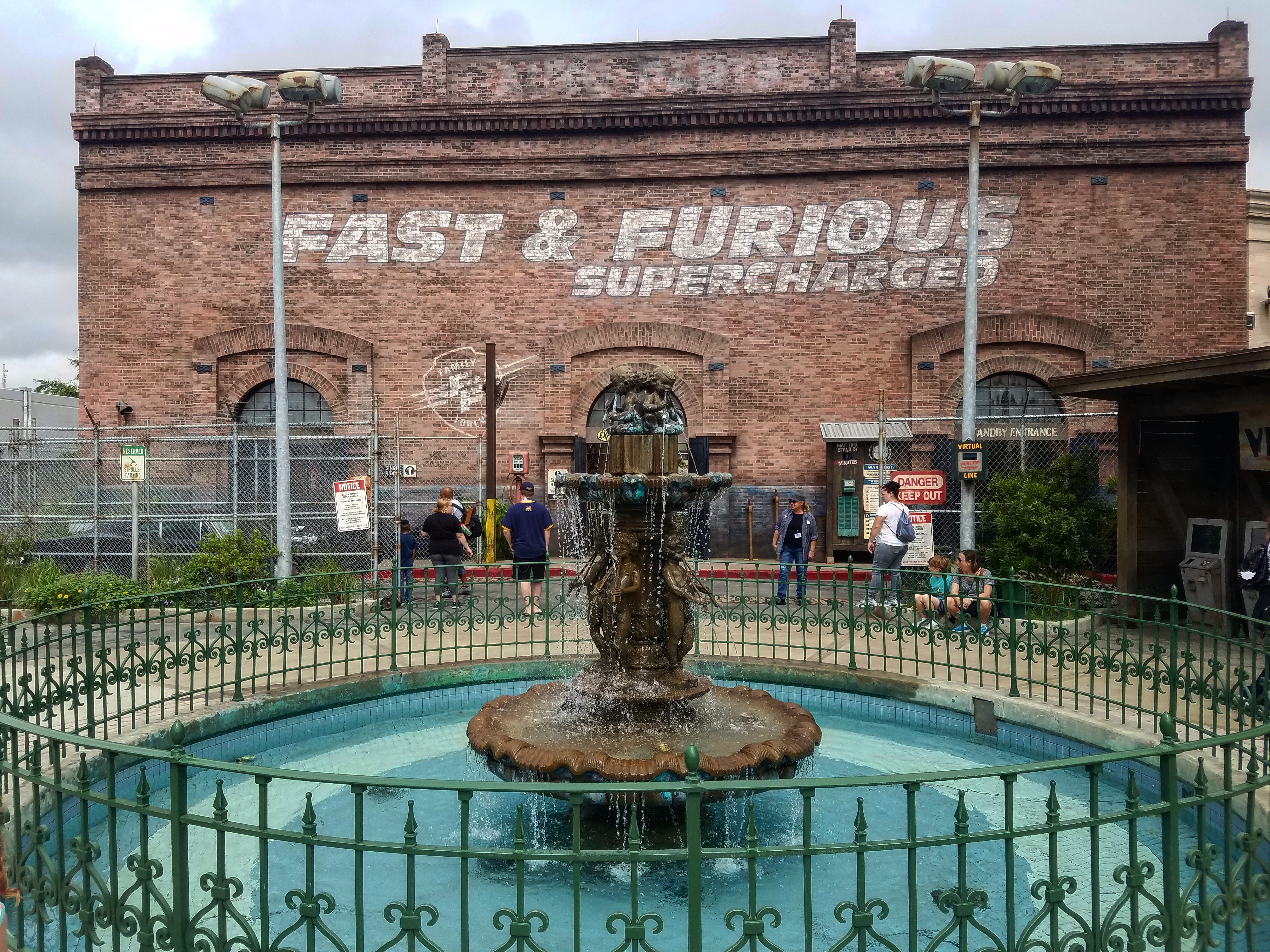 The front entrance features a photo op with the famous black Dodge Charger that belongs to Fast & Furious main character Dom Toretto (Vin Diesel). The front warehouse does not have a roof and is part of the extended outdoor queue. While waiting in line, cars racing can be heard off in the distance. The first actual room in the queue is a massive indoor warehouse featuring numerous character-specific cars from the films. The line snakes around each vehicle, making it great for photos. The second room features a tricked-out pickup truck blasting music and playing scenes from the films on a projector. This room continues around various car parts (even a whole engine) and then takes you into the first pre-show area. Here, in what is called the family room, a live actor interacts with Mia (another Fast & Furious character) via monitor, and she fills you in on some background info. Guests are then taken to the War Room for a second pre-show. This room is decked out with all sorts of technology and screens. Another actor/monitor interaction takes place as Tej (played by Ludacris in the films) fills you in on the situation the guests now find themselves in. After this, you reach the loading bay, where a set of twin “party buses” await for your ride to begin. Storyline
The story of this attraction is a variant of the one found in Universal Studios Hollywood, but it shares several similarities. For this ride, guests are invited to the headquarters of the Fast & Furious crew to celebrate a recent race victory. Tej designs state-of-the-art party buses to transport guests to an afterparty being held in town. Family is a heavy theme found in the film series, and it is something that is evident in this story, from the queue to the first pre-show. Upon reaching the war room, we soon discover that Owen Shaw, the villain of Fast & Furious 6, is locating a witness hidden among the crowd, and he is honing in on your location. The party is now a diversion to this attack and we are whisked away to a hideout in San Francisco. From this point on in the ride, we are attacked by Shaw and his people and experience the main portion of the attraction. 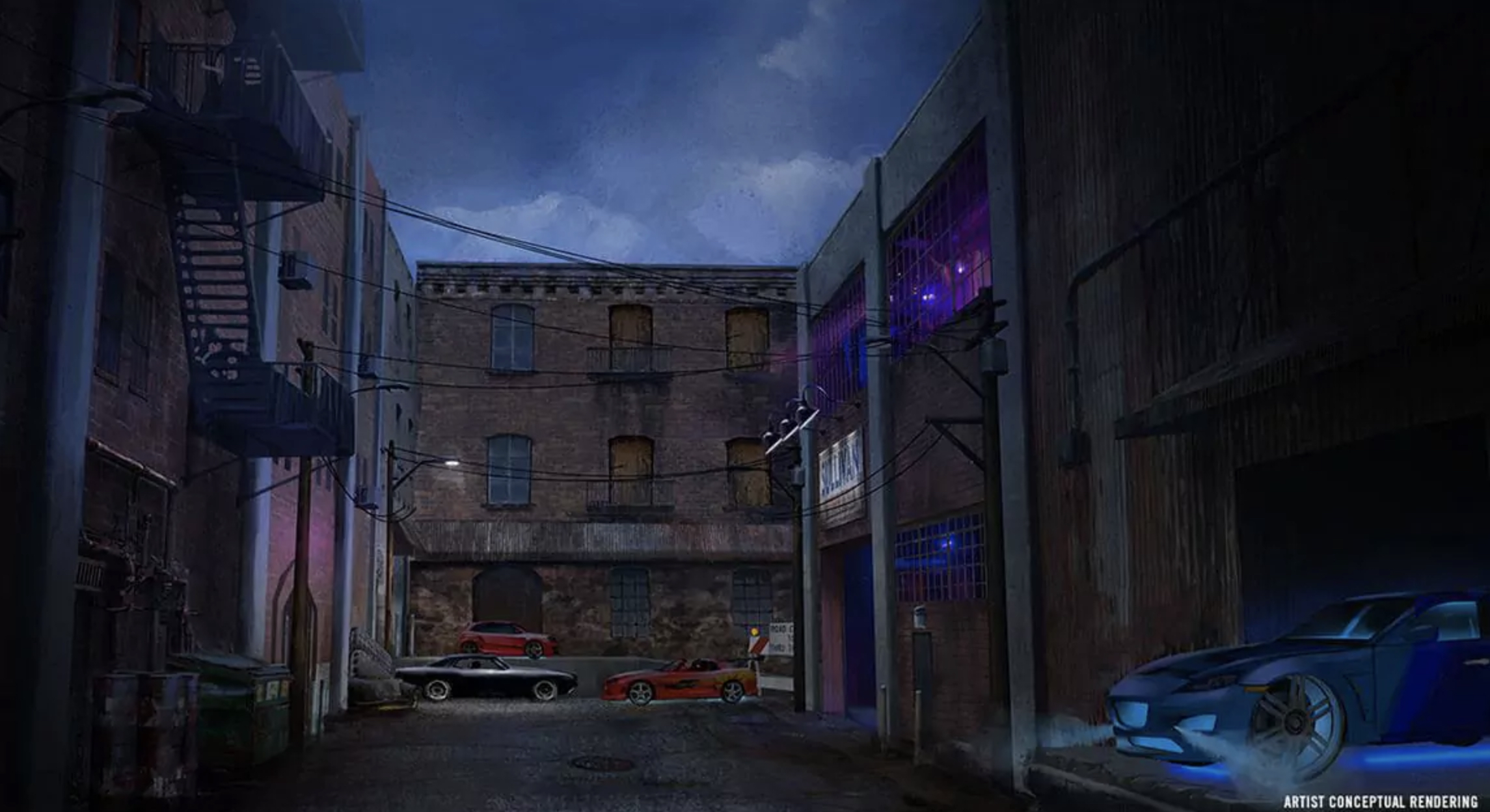 Ride Experience
Fast & Furious: Supercharged is almost exactly like Skull Island: Reign of Kong at Islands of Adventure in terms of ride technology. As I mentioned before, the vehicles are themed to buses that feature a bright array of lights that are nicely decorated. The buses feature “drivers” which, like Kong, are fake but on this ride, they do not interact with the audience. The vehicles themselves are about 3/4 the size of the ones on Kong, and they do load together and actually run in tandem during the ride. Unlike Kong, the buses do have a handle on the seat to secure yourself in the vehicle. On the ride, there are several scenes, the first of which is one of the most convincing sensations of movement I’ve ever felt on a simulation/screen. While simple in execution, the first scene uses a very well hidden screen to give the sensation of fast motion in an underground tunnel. I compare the feeling to that of the floating sequence of The Amazing Adventures of Spider-Man. Scene two is a very large practical set, themed to an alleyway in San Francisco. I was blown away by the size of the room, noting how it really felt like an actual small city block. The third scene is where Supercharged becomes a direct clone of the original one in Hollywood. The party sequence from that ride uses a real set with a projection effect to make it seem like the cast from the films is right there in front of you. Finally, the ride moves into the finale which is a room with a 360-degree screen. The buses have a clear window in the front, allows for a full range of motion. I sat in the lead bus in row three, and I had an excellent view throughout the entire experience. In this scene, there are water/smoke effects as well as a lot of movement. I made note in my live video coverage that Supercharged shakes and moves much more so than Reign of Kong. The handles are definitely needed as I found myself being tossed around without them. After this scene concludes, the buses return to the station, and guests disembark into the Custom Gear gift shop. Overall Opinion
I had known for several years that Fast & Furious: Supercharged was going to be very similar to the one on the Studio Tour in Hollywood and Reign of Kong here. I compare it to the similarities of Spider-Man and Transformers; both are using the same technology while offering a different experience with their theme. I thought the outdoor theming to be quite amazing, the San Fran land as a whole looks much nicer, and the warehouse fits in great in its waterfront location. The soundstage behind the entrance that holds the ride is also themed as well, which is an added bonus. The queue itself has very wide lanes and all of the rooms are immense, which will help with busy summer crowds. I had no issue with any of the theming inside as I found it to be very well executed, and, while I am not a hardcore fan of the films, there are plenty of Easter eggs the queue that fans will recognize. Both pre-show rooms did a serviceable job of explaining the story, and the interaction between the live actors and the screens will only get better with time. As for the ride itself, there were several things I did enjoy. While the buses are a recycled concept, the smaller size allowed for a much greater range of motion at the end, and the clear glass front made viewing the screen easier. As I mentioned earlier, the first scene of the ride was very convincing. I found the second scene to be stellar as it was a practical set (anyone who has met me knows, I prefer practical effects over screens). Where I had an issue with the ride was where it became a copy of Hollywood’s version. The projection room felt more like something that belonged in the queue rather than as a major scene on a ride. The 360 room, while cool, does have some flaws. The CGI of the scene felt more like a video game in terms of realism. Additionally, I feel that the scene could have benefited from being set at nighttime, and I feel 3D could have masked some of the awkward looking effects. 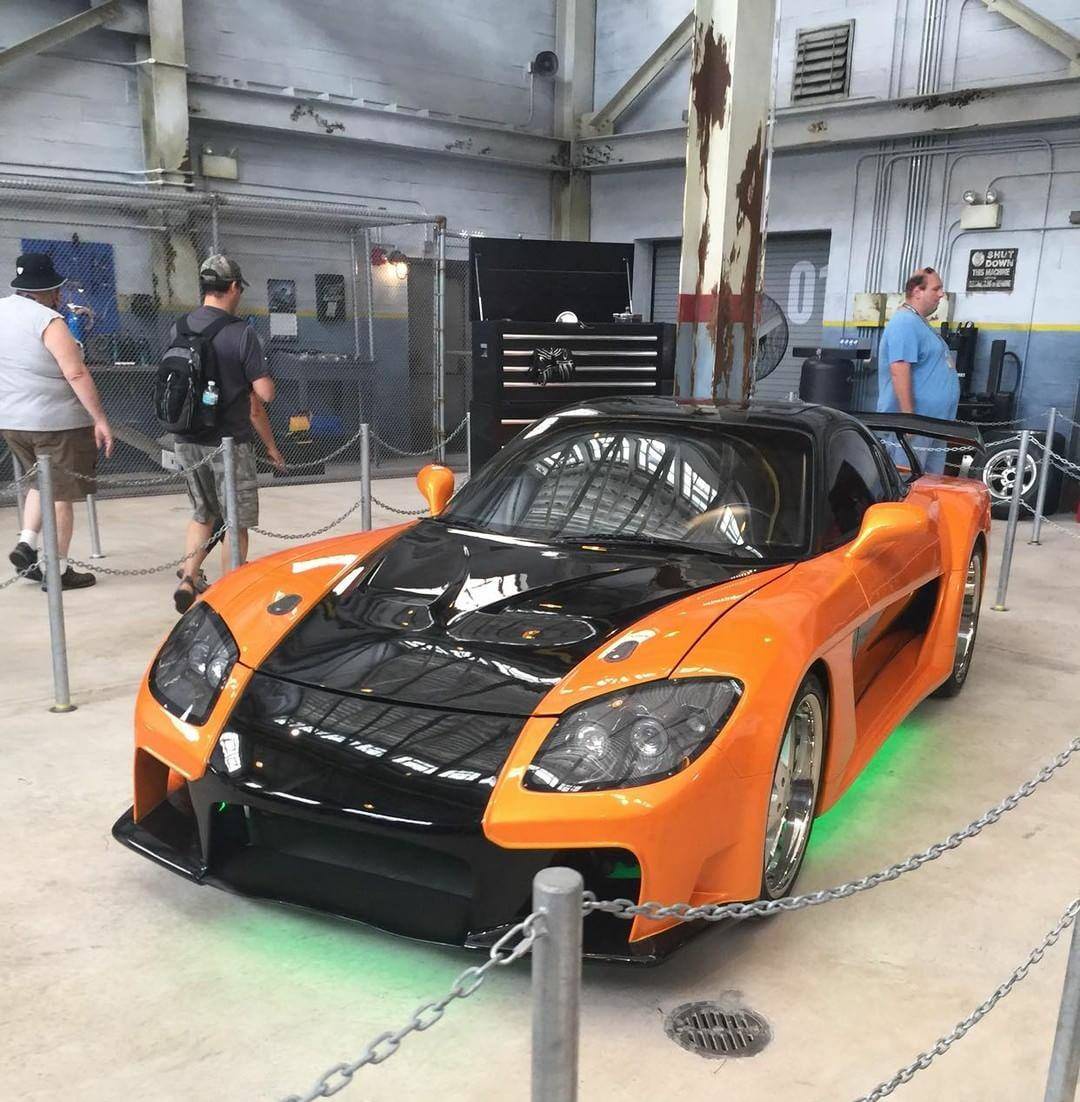 Overall, Fast & Furious – Supercharged is not the best ride at Universal Orlando, but it still was a fairly fun experience for me. In my personal opinion, I think another form of ride technology would have been better suited for a franchise based on fast cars and insane action. What we have, however, did replace a show and a horribly aging attraction (the Disaster ride), and for that, the Fast & Furious ride can be seen as somewhat welcoming for introducing something different (while the ride system is the same as Reign of Kong, the storyline and overall experience is not). When comparing it to other rides in the park, Fast & Furious – Supercharged may not stand up to something like Harry Potter and the Escape From Gringotts, but it is a ride worth experiencing. Fans of the franchise and cars, in general, should enjoy the level of detail put into the queue and may enjoy the attraction as a whole. I don’t think that the ride is bad as I left feeling pleasantly surprised by some of the effects on the ride, I just feel that a massive franchise like Fast & Furious deserved a better attraction that was we received. To end this review, I will say it is something I would experience again. I am looking forward to the next big additions to Universal Orlando, which are not expected to rely on screens. You can count on World Of Universal to be there when these new experiences come.