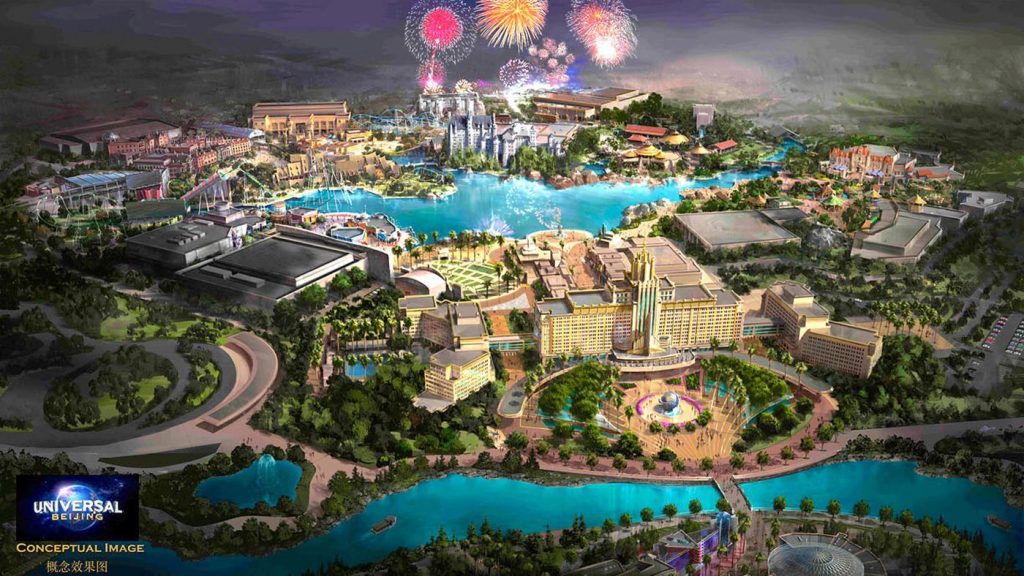 Universal Studios Beijing is one of the most ambitious projects Comcast is developing for their theme park chain. The multi-park, numerous hotel resort destination is slated to open its gates in 2020 (it is expected to be completed in phases), and it will be the first Universal park in Asia since Universal Studios Singapore opened in 2011. Beyond initial concept art, not much has been shared on the specifics of the main park until recently.

Thanks to a post on the online forum Themeparx, we now have details on the kinds of attractions and lands we will see in the Beijing park. It is important to note that the information in this report may be outdated and/or subject to change by the time the park opens as details are finalized. This post contains both recent concept art and past renderings.

The main park in Universal Beijing seems to be a “greatest hits” of sorts made up of many popular attractions seen in other Universal parks around the globe. Based on the overhead view (pictured above), we can see the park will be split up into several themed lands which include Hollywood, Transformers, Kung Fu Panda, Jurassic World, Waterworld, Harry Potter, and Despicable Me. Themeparx had a breakdown available of what to expect in each of these lands as far as theming and attractions go, and we will discuss them here.

Starting off in Hollywood, the two things that are noticeable off the bat are a performance stage similar to the one in front of Hollywood Rip Ride Rockit in Universal Studios Florida (this can be seen in the original conceptual rendering) as well as a clone of the Fast & Furious: Supercharged attraction. Theming wise, this area should be very similar to the other Hollywood sections in Universal’s parks.

Moving up from Hollywood is a land dedicated to Transformers. The most notable attraction is a clone of The Incredible Hulk Coaster found at Islands of Adventure. Leaked concept art from several months ago showed this coaster in more detail. The other main attraction in this Transformers land will most likely be the Transformers: The Ride-3D attraction. The look of this land from previous leaks showed off a sci-fi city look somewhat reminiscent of Universal Singapore’s themed area of that name.

Next door to Transformers is an area dedicated to the Dreamworks animated film Kung Fu Panda. According to available information, this will be the first all-indoor themed area Universal has done and the first DreamWorks area since Comcast acquired the company. It is hard to tell what exactly will be inside the structure, but the most obvious locale would be the village that Po lives in. There is available space located at the top of the structure that will hold an attraction, but it is difficult to say what kind it will be.

Right outside of Kung Fu Panda is a copy of the Waterworld stunt show that can be seen at numerous Universal parks. This area does not seem to hold any other attractions besides the show itself.

Adjacent to the show arena is Hogsmeade Village and the iconic Hogwarts Castle for the Wizarding World of Harry Potter area. Reports indicate that this area will consist of the Forbidden Journey attraction and Flight of the Hippogriff. One thing that is interesting is the large plot of land left as green space in the concept art. The area is sizable and is right up against the main street in Hogsmeade. It is also in the same exact spot as the new Harry Potter coaster under construction in Islands of Adventure. This space will probably be left open when the park opens, but we can eventually see a coaster like Islands of Adventure’s making its way to Beijing a few years down the line. 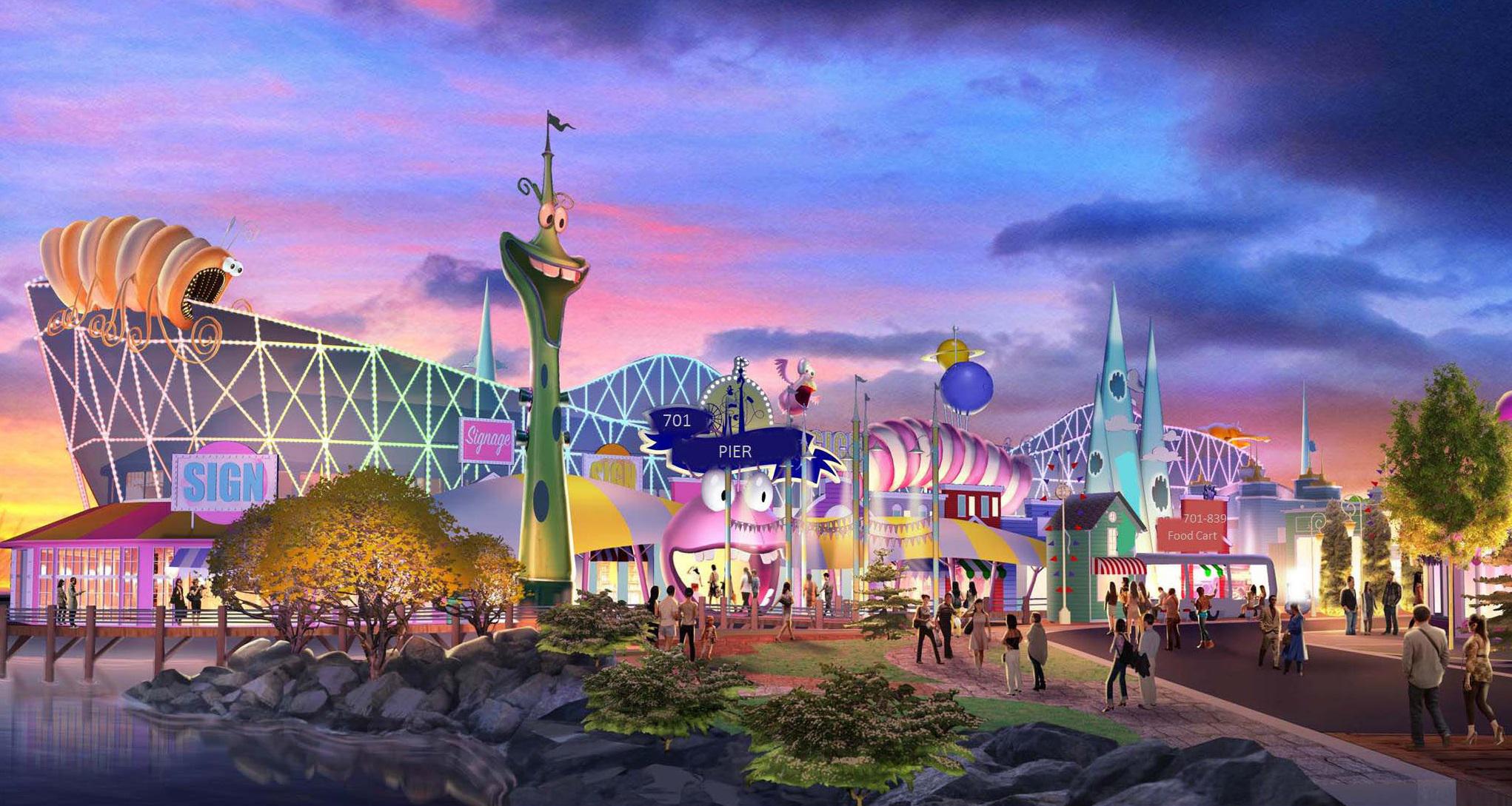 In the southeastern corner of the park is a pier-themed land based on Despicable Me. Much like Minions Park in Universal Japan and the neighborhood in Universal Studios Hollywood, this area will have multiple structures with architecture unique to the film. Despicable Me: Minion Mayhem will be the main attraction of this land, but there also seems to be another attraction located in the center. An oblong-shaped covered pier themed to the Super Silly Fun Land amusement park from the film juts out into the park’s central lagoon. This is the only land that has a handful of street-level concept art attached to it, showing off the various buildings seen throughout the land. 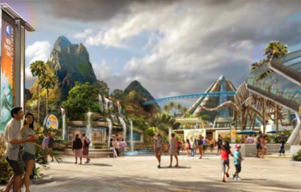 The last area to cover in Universal Beijing is Jurassic World. Of all of the lands in the park, this one seems to have the most unique lineup of attractions, two of which have never been featured in any Universal park. Similar to Jurassic Park at Islands of Adventure, this land can be seen across the park’s lagoon as soon as you walk into the park. Renderings show a mountain looming in the background with a waterfall flowing into the lagoon as one of the centerpieces of the area. The first attraction is near the shore of the lagoon and is described as a “glass dome.” A ride can be seen likely going into and outside the dome, but not much is known on the kind of ride it is. It has been speculated that this attraction is a roller coaster since Islands of Adventure has been rumored to get a Jurassic-themed coaster. The glass dome could possibly be the same one that housed the Pteranodons in the first Jurassic World film. Renderings show the potential of a recreation of the Innovation Center featured in the Jurassic World films with the likelihood of it serving as a restaurant. It is rumored that one of the buildings will be home to the land’s signature attraction—the Jurassic World gyrospheres. Information is scarce on this attraction, but it has been rumored for quite some time. The Jurassic World land is fleshed out by several restaurants and an area that may be for a Raptor Encounter kind of experience.

Overall, Universal Beijing seems to be a mix of every popular attraction that has come before in other Universal parks. While certainly not finalized, the concept art and park plans are certainly interesting. It is always refreshing to see what new and bold ideas Universal brings to their parks. As more news develops on the Universal Beijing project and any other details around the universe, we’ll be sure to cover it, so stay tuned to worldofuniversal.com.