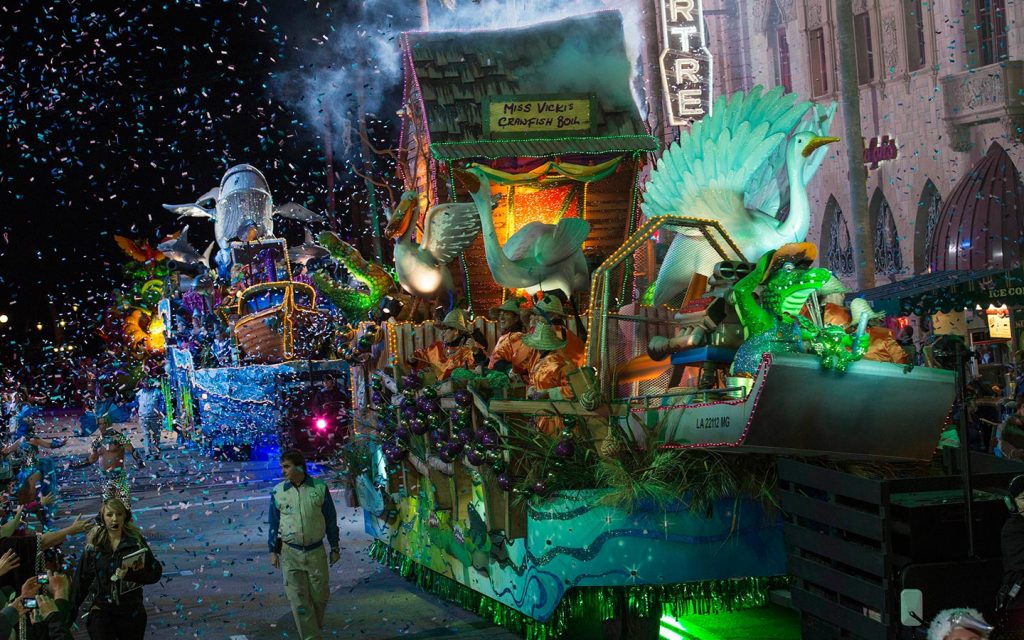 New Orleans isn’t the only destination that celebrates Mardi Gras… Universal Orlando does as well and the celebration begins next month! On select days, you can experience Universal Orlando’s family-friendly version of Mardi Gras at Florida’s biggest party with live performances, a spectacular parade, and Cajun cuisine. The ultimate party runs on select days from February 6th through April 16th.

Concert Lineup
After the parade, the party continues at the Music Plaza located directly next to Hollywood Rip Ride Rockit’s entrance with a live performance on every event night. Some of the biggest names in music including Fall Out Boy, Shawn Mendes, and 3 Doors Down will take the stage at this year’s event. 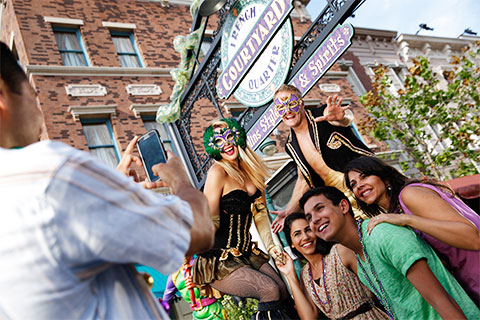 The heart of Mardi Gras lies at the French Quarter Courtyard where you can purchase an array of delicious Cajun meals like jambalaya, beignets, gumbo, and so much more. You can also purchase different beverages and see and hear bands direct from New Orleans perform. The French Quarter opens later in the day and typically closes during the concert.

Frequently Asked Questions
Question: Do I need a special ticket to attend this event?
Answer: No, Universal Orlando’s Mardi Gras celebration is included with your regular theme park admission or annual pass.

Question: When does this event take place?
Answer: Universal Orlando’s Mardi Gras celebration takes place every day there is a concert in place. The event begins February 6th and runs on select days through April 16th.

Question: Where does this event take place?
Answer: The Mardi Gras celebration is at Universal Studios Florida. Universal’s sister theme park, Islands of Adventure, does not take part in this event.

Question: Is this event appropriate for children?
Answer: Yes, this event is a family-friendly version of the popular New Orleans event. While the event is designed to be appropriate for people of all ages, please be aware that some artists may use foul language during their performance.

Question: Where do the concerts take place?
Answer: The main concerts take place at the Music Plaza in Universal Studios Florida, which is located next to the Despicable Me Minion Mayhem attraction and directly next to Hollywood Rip Ride Rockit’s entrance.

Question: Does the park provide seating during the concerts?
Answer: Seating is not provided and you are prohibited from bringing portable chairs into the park as well.

Question: About how early should I arrive to watch a concert?
Answer: Lines can begin to form as soon as the park opens. However, we recommend getting to the Music Plaza at least 3-4 hours in advance for better viewing. The Music Plaza tends to fill up after the Mardi Gras parade. If you’d prefer not to wait but wish to see the concert, we recommend watching the show at the entrance of Universal Studios’ Classic Monsters Cafe.

Question: Am I allowed to leave the concert area once I enter?
Answer: Yes, you are permitted to leave and return to the concert area but please be aware that other people will be entering the area and there may be a possibility that you could lose your spot.

Question: What happens if it rains on an event day?
Answer: The event occurs rain or shine.