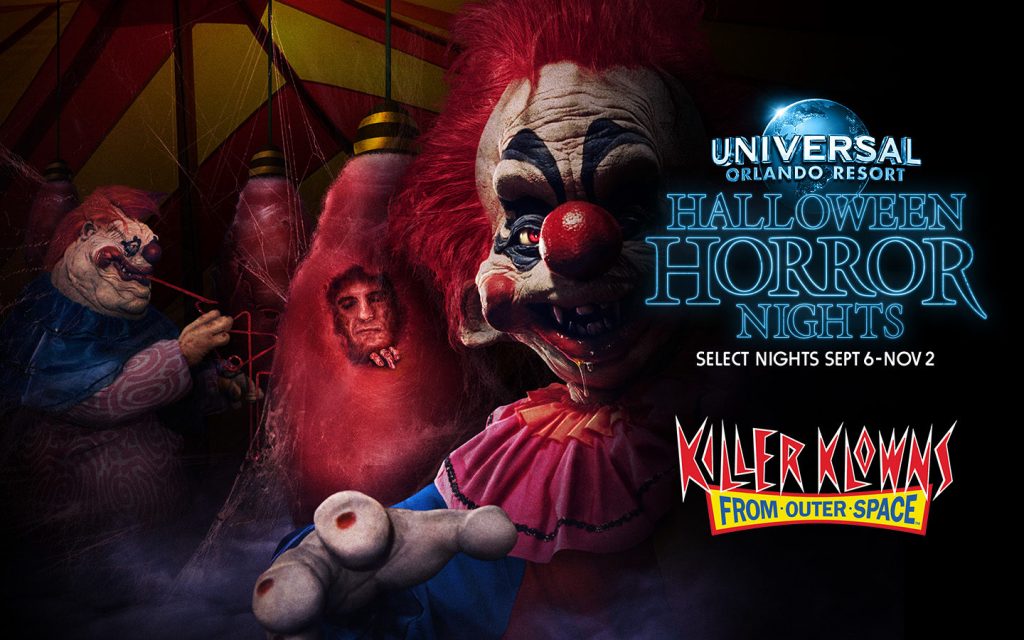 The new experience will transport you to the small town of Crescent Cove and an eerie amusement park, where you’ll see the Killer Klowns’ circus-tent spaceship and the cotton candy cocoon storage room. The house will test your sense of fear with fairground fare aromas of cotton candy, buttery popcorn, and ice cream, a sign of the murderous awaiting you as you move between scenes. You’ll be forced to evade them or find yourself in the ‘ cotton candy cocoons.

Killer Klowns from Outer Space is just one of the many houses at Halloween Horror Nights in both Orlando and Hollywood. When the event nears, our planning guides will be updated to highlight the new experiences.

Based on the cult 1980s film favorite, the “Killer Klowns from Outer Space” mazes will transport guests to the sleepy small town of Crescent Cove, taken over by a pack of murderous clown-like creatures. Guests will be lured by the sweet smell of cotton candy and ice-cream and find themselves in an otherworldly circus tent where they’ll come face-to-face with the crazed klowns and their sinister, side-splitting antics. As they make their way through the Big Top Space Ship, guests will witness diabolical klowns making cotton candy cocoons from unsuspecting victims and will realize the joke’s on them as they are next to become the gooey snack. From one shrieking klown to the next, the mazes will lead guests through the doomed community of Crescent Cove to an eerie amusement park closed for the season. Trapped in a terrifying funhouse full of killer klowns, guests will be left screaming as there’s no stopping this twisted three-ring circus.

Universal Studios’ “Halloween Horror Nights” is the ultimate Halloween event. For more than 25 years, guests from around the world have visited “Halloween Horror Nights” to become victims inside their own horror film.  Multiple movie-quality mazes based on iconic horror television shows, films and original stories come to life season after season. And, the streets of each park’s event are transformed into highly-themed scare zones where menacing scare-actors lunge from every darkened corner.