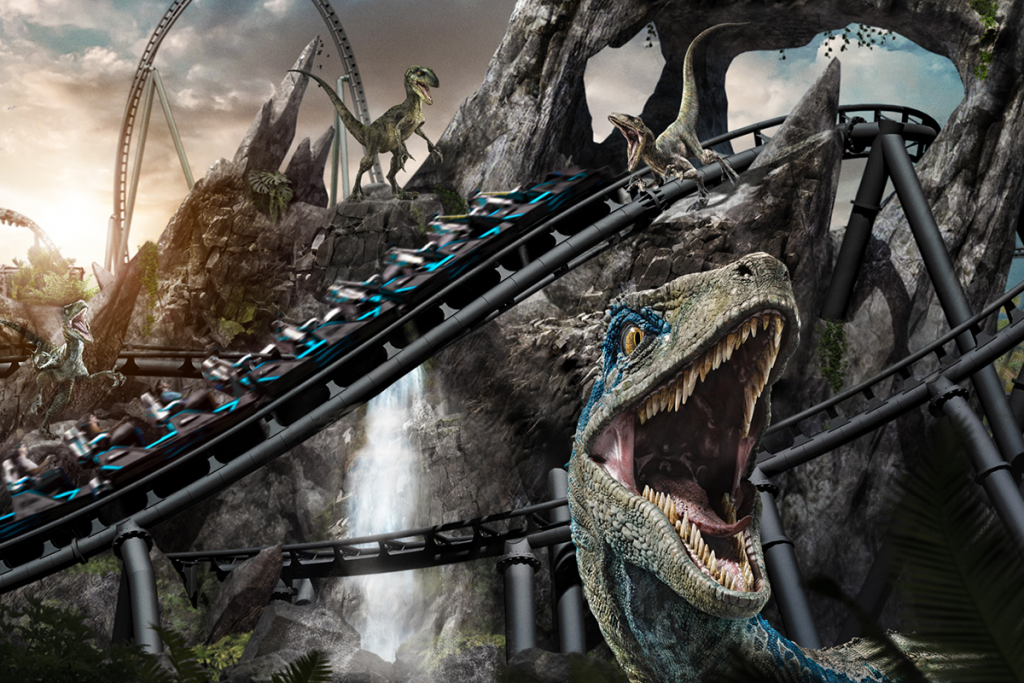 Hello WOU fans! It has been awhile since our last park update, and we are so excited to inform you of some major changes to Islands of Adventure. For the past few years, Universal has been hard at work bringing their newest attraction to life—Jurassic World VelociCoaster. Now just mere months away from opening, fans can get a taste for the thrilling experience that has made its home inside the Jurassic-themed land. In this article, we will break down all of the new updates regarding the coaster as well as some changes to the overall land and a possible opening date.

Upon walking into Islands of Adventure, it is very hard to miss the towering structure that is this coaster. Dominating the skyline across the lagoon, the 155-foot tall peak of the ride is rather intimidating. The coil of the all-black track continues across the waterfront over towards the back patio of the Three Broomsticks restaurant, before gliding over the water towards the brake run. What is truly breathtaking about this coaster is its sheer scale. Despite the fact that big sections of track are visible anywhere around the lagoon, so much more of the attraction resides in the heart of the Jurassic Park area.

Directly across from the entrance to Jurassic Park River Adventure is a long row of “electrified” fences. This concrete and steel structure was built to contain the velociraptors inside their paddock as well as the coaster track. Recently, construction walls against the fence came down, offering guests their first look inside. The coaster blasts off into the paddock with the help of a 50 mph launch then twists and winds its way around very impressive rockwork, foliage, and even a waterfall. In this section, riders will also come face-to-face with the four raptors from the Jurassic World film just before hitting the second launch of 70 mph. Now that the construction walls are down, guests can get some pretty amazing photos of the coaster whizzing by. The area transforms at night with the fence and coaster trains glowing a deep blue color.

As part of the ongoing construction, Universal has begun to make several changes to the Jurassic Park area. The VelociCoaster, as well as the popular Raptor Encounter experience, are both branded as Jurassic World attractions, although Universal stated that the overall land will remain as Jurassic Park. While that may seem odd, the mixture of the two franchises isn’t too distracting while walking around the land.

Perhaps the two biggest changes to the land are the waterfront plaza and new signage that has popped up in the last week. The VelociCoaster entrance can only be accessed from the area in front of the Discovery center along the lagoon. A brand new entrance plaza has been constructed for the ride that will allow guests to get up close and personal with several of the coaster elements. For now, access to this area is blocked off as work is still ongoing, but you can still get pretty great photos of newly installed raptor figures along the path.

Universal recently installed a new directional sign for the coaster along the pathway near The Watering Hole stand. The new sign for the ride resembles the Gyrosphere sign seen in the 2015 Jurassic World film. It is another piece of Jurassic World aesthetic that now exists in harmony with Jurassic Park. Along the bottom is an added section that teases the opening date, although it is said once that part comes off, a wait time sign will be there.

When is it opening?

According to the official Universal Orlando website, television spots, and in-park signage, VelociCoaster will debut in the summer of this year. While that is vague, we can guess a more accurate opening based on some recent developments. In the Jurassic Outfitters store as well as several other retail locations around the resort, new merchandise for the ride is starting to be sold. Among these are special grand opening shirts and pins. These types of products are usually collectibles and are sold closer to the actual opening of the ride.

The coaster has also been testing all throughout the day. Sometimes these tests have empty trains, half full or full trains of water dummies to calculate weight. Testing is an important aspect of any new ride and the more frequent the test, the closer we get to riding it ourselves. We expect based on the little bit of construction left as well as the other factors, that this attraction should be open by June with a possible soft opening just before that (delays aside). We will be sure to keep you updated once an actual date is announced. Thank you for reading our latest park update. Be sure to check back with us for more information on Jurassic World VelociCoaster.

For great photo opportunities, we recommend going to several spots: