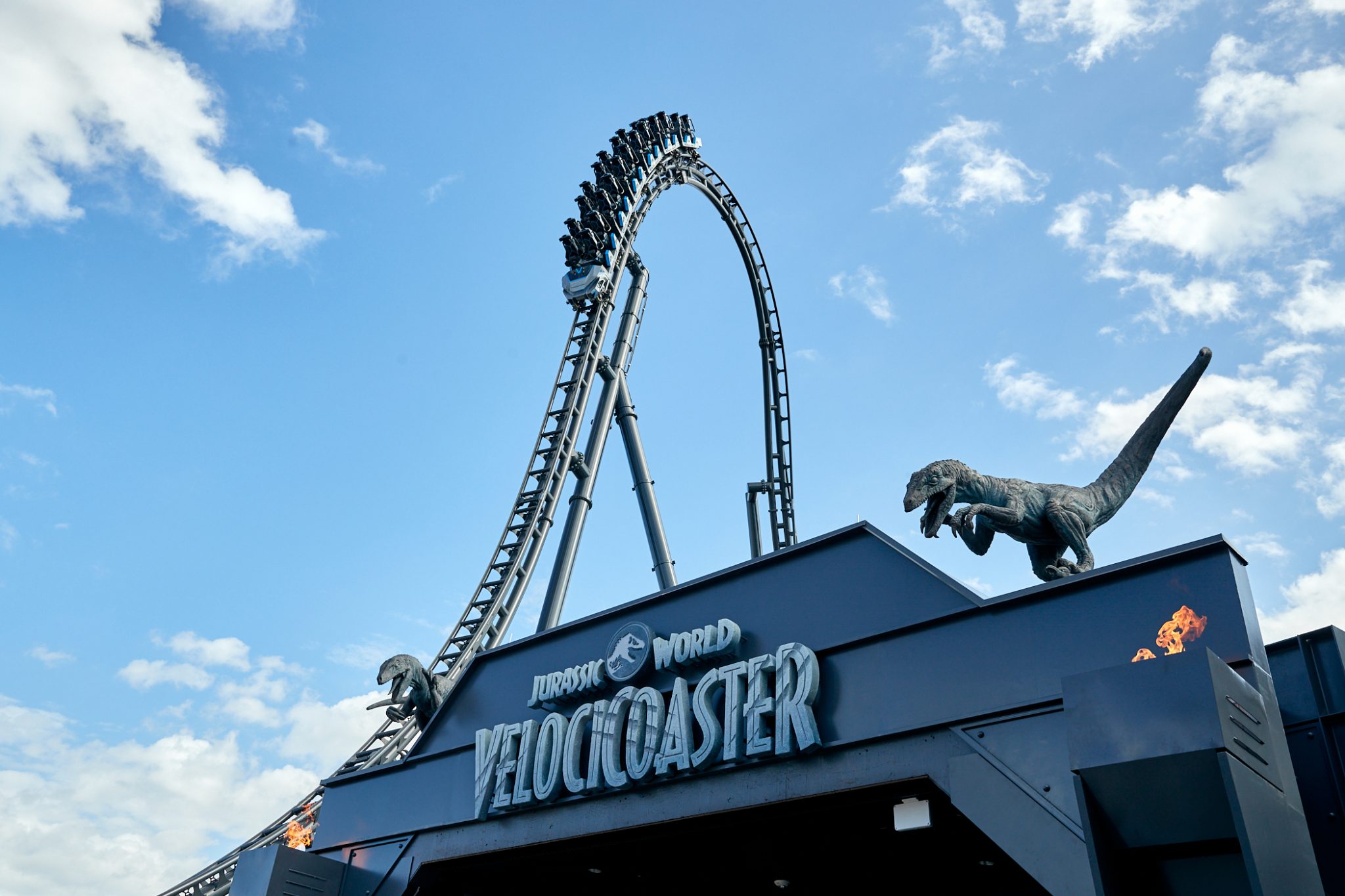 On June 10th, Universal’s Islands of Adventure will debut the “apex predator of roller coasters” in the form of Jurassic World VelociCoaster. The newest offering in the park will bring you face to face with a pack of swift and hungry velociraptors from the Jurassic World series. This towering attraction has been one of the most highly anticipated rides coming to Orlando . . . and for good reasons.

In the last few weeks, the park has begun technical rehearsals for the coaster, allowing park guests to get their first taste of this Jurassic expansion. I was lucky enough to catch a ride during this period and have crafted a review for you to enjoy. This review will be broken down into three sections: Queue, Ride Experience, and Overall Opinion. Just as with our other articles, I will also share some helpful info for first time riders.

Your experience begins at the entrance, situated along the waterfront of the Jurassic Park land, where two Velociraptors stand guard atop the main portal into the raptor containment facility. The overhead Velociraptors as well as the view of the main drop set the tone for what to expect and make for a grand entrance. The first section of the queue is a large curved metal tunnel with accents of glass and concrete; this matches the aesthetic of the Jurassic World movies (it is important to note that despite the ride being in the Jurassic Park area, the VelociCoaster attraction is themed to the Jurassic World movies).

At the end of the tunnel is a massive statue of the raptor squad (Blue, Charlie, Delta, and Echo) from the first Jurassic World film. This area is great for photo ops not only because of the detailed statue but also because of the hexagon shaped lights above that pulse with red and blue hues, together creating an intriguing atmosphere. Samples of soundtracks from both Jurassic World films play in this area, adding to the ambiance. This room also displays a video loop featuring the animated Mr. DNA character from the Jurassic franchise.

Entering the second area of the queue, you are faced with a row of glass windows, offering a peek at the coaster’s launch tunnel. At certain timed intervals, the room flashes red as the coaster rushes by at full speed. Not too many rides offer a glance at a launch like this, so this is an awesome experience. To add onto this feature, a pack of raptors also appear on the glass, staring at onlookers just before chasing after the coaster.

The next room of the queue is a narrow dark area with two video screens. Dr. Henry Wu from the Jurassic films appears as part of a brief video loop explaining the behavior of the raptors. Elsewhere in this section, employee “lockers” can be found. Each locker has minor but interesting details, such as Dr. Grant’s (Sam Neill) book, bags of Dino food, and notes about raptor care.

Afterward, you enter perhaps the most impressive and picturesque section of the queue. Here, “real” Velociraptors are held in special muzzles practically within reach. These lifelike animatronics are capable of shaking their heads, blinking their eyes, and breathing on you. Fans of the Jurassic movies may remember this as a specific callback to the first Jurassic World film. Just beyond this room is the final approach towards the ride’s loading station.

Before boarding the coaster, you are required to store loose articles in the available lockers located within the queue. Unlike the lockers for most attractions at Universal, the lockers at Jurassic World VelociCoaster are double sided, allowing you to safely store your belongings and retrieve them without having to be crammed in the same room with many other guests. Additionally, because the locker room is located so far into the queue, you’re allowed to keep your phone and other items with you throughout your wait in line, which is a huge plus. Once you store your items in the locker, it’s time to head upstairs and prepare to buckle up.

Before boarding, a preshow plays starring Claire (Bryce Dallas Howard) and Owen (Chris Pratt) from the Jurassic World movies. Here, it is explained that the latest addition to the “carnivore expansion” at Jurassic World is a roller coaster that goes into the raptor paddock. Owen obviously thinks the entire idea is dangerous, and he advises against riding the attraction. Claire tries to reassure Owen by stating the ride vehicles are specially designed so no one gets hurt. After the pre-show ends, the station awaits.

The station for the coaster offers one of the best views of the ride via a large set of windows. This peek into the paddock is a great way to build up hype for riders. The trains themselves are two seats across with a total of twelve rows. These seats only provide a lap bar that comes down from above riders’ heads, giving a great sense of freedom.

Shortly after departing the station, the train pulls into a dark tunnel and comes to a complete stop. Beside you are the raptors, ready to be freed from their cages. Fog begins to fill the tunnel and the “engine” of the ride vehicle charges up. With one blast, the coaster takes off into a 50 mph launch. The ride pulls up over some tall rockwork and dives down into a cave, providing a feeling of both airtime and a head chopper moment. The ride then rises up, dives down into a loop, and continues to barrel its way around the raptor paddock.

This section of the ride (inside the raptor paddock) has many elements back-to-back, including airtime hills, tightly banked turns, and more near misses with the rocks. Then from seemingly out of nowhere, the raptors attack. The four raptors from the movie are sprinkled around the course and have a timed screech when the train passes by. The coaster then makes a curved dive into the second launch, and the real fun begins.

In a flash, the train is propelled into its top speed of 70 mph. The speed is necessary to send the train to the top of the 155 ft tall peak. Before you can catch your breath, the ride plummets down its drop and almost instantly sends you into an upside-down stall. The final section of this coaster wraps around the Jurassic Park entry bridge a couple times, providing additional airtime moments and tightly banked turns.

After, the coaster heads back out over the water and goes into an element Universal calls “the Mosasaurus roll”, which is a heartline roll (also called a barrel roll). One word to describe the feeling you experience in this roll is chaos, and this is a good thing if you’re a thrill seeker. Because you enter into the roll at a high speed, the force combined with the lap bar design feels as if the ride will throw you into the park’s lagoon. It is one of the most intense elements found on any coaster, let alone other rides in the park. Once you are clear of the lagoon, the coaster banks into its final break run and returns to the station. Now that you are safe from the raptors, you exit the ride, head downstairs, and arrive at the backside of the lockers to retrieve your items. Beyond this area is the on-ride photo booth and the ride’s gift shop.

Jurassic World VelociCoaster is, without a doubt, one of the most intense attractions out there. This coaster provides sensations that are far beyond what non-coaster enthusiasts will be used to. Very few rides have the total package of speed, height, airtime, unique elements, and fantastic theming; VelociCoaster achieves it all. On its own, VelociCoaster has everything a fan of thrill rides would want. Starting with the train, the seats and lap bar system are very comfortable, and the lack of restraint around your shoulders means no head banging. The track is very smooth and allows for a very re-rideable experience.

The elements on this coaster are sensational and forceful. I can’t tell you how many times I flew out of my chair. The drop was fantastic and is even better in the back row from what other riders have said. Of course, the best part was the final inversion over the water. I have never experienced anything like that in my life, and it will catch first time riders by surprise for sure.

The theming is also just as superb as the coaster itself. Universal did an incredible job recreating the design and feel of the Jurassic World park in the queue and in the paddock itself. Jurassic World VelociCoaster will be highly talked about as one of the best roller coasters on this planet for years to come (it’s my new #1), and I highly recommend riding it as soon as possible.

Here are some useful tips and information for first time riders:

Inside the Discovery Center, located next to the ride entrance, is a bank of large lockers. If your bag/ belongings do not fit in the test locker at the ride entrance, come here. Unlike the lockers available in the coaster’s queue, these lockers are not free, but they give you the ability to securely store large items.

The indoor section of the queue isn’t overly large, so there is a big area set aside for outdoor queue space. While some of it is covered, the rest is in the sun. If the line is long, be prepared to wait outside.

From what we have heard from other coaster enthusiasts, this ride is best in the front and back rows. There is a separate line in the station for the front row, but because there are only two seats across, the line will back up. If possible, try to ride at night, as it is said to be one of the best nighttime experiences in the area.

The ride offers a regular line, single rider, and a Universal Express line. The single rider line skips most of the cool features in the queue but may provide shorter wait times.