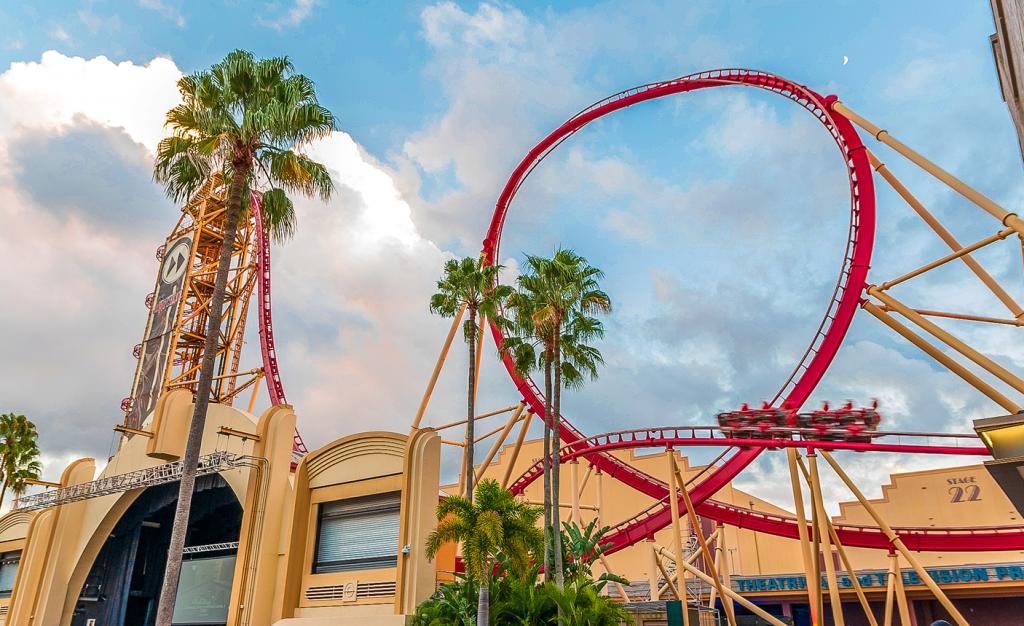 Hollywood Rip Ride Rockit, located at Universal Studios Florida, is an adrenaline pumping roller coaster with a 90-degree 17 story vertical lift and a 103 feet wide non-inverted loop. The coaster features six near-miss moments and first-ever moves and has a top speed of 65 miles per hour. Once you board the roller coaster, you are given the opportunity to select a song from the preloaded soundtrack. If you do not select a song, a song will be chosen at random during your ride through. After the ride, you can view and purchase an on-ride video edited as a music video. While you can select a song from the playlist on the screen, you can also select a song from Universal’s hidden soundtrack.

When boarding the ride vehicle, you are to pull the restraint bar over your lap, which is where the screen will be located to select a song. The screen will display different music genres along with different artists and songs. If you’d like to play a song from the hidden soundtrack, however, press down on the Hollywood Rip Ride Rockit logo on the restraint for at least 10 seconds rather than selecting a genre shown on the screen. When you release your finger, a number pad should appear on the screen. Each song has a three digit code and must be entered properly to play a song from the hidden soundtrack. Please be aware that when choosing a song from the hidden soundtrack, an on-ride video will not be available for you to view. The discovered songs on the hidden soundtrack can be viewed below:
101 – The Temples of Syrinx by Rush
102 – Blues Before & After by The Smithereens
103 – Break on Through by The Doors
104 – Crocodile Rock by Elton John
105 – Do it Again by Steely Dan
106 – Don’t You by Candlebox
107 – Drivin’ Rain by Gov’t Mule
108 – Eight Miles High by The Byrds
109 – Fantasy by Aldo Nova
110 – Fool by Rollins Band
111 – For The Love Of God by Steve Vai
112 – Free Bird by Lynyrd Skynyrd
113 – Immigrant Song by Led Zeppelin
114 – Just Because by Jane’s Addiction
115 – Live by Lenny Kravitz
116 – Mexicola by Queens of the Stone Age
117 – Rock instrumental
118 – Latin/jazz/funk instrumental
119 – Rock instrumental
120 – Rock instrumental
121 – Runnin’ Down a Dream by Tom Petty
122 – Start Me Up by The Rolling Stones
123 – Stockholm Syndrome by Muse
124 – Diary of Jane by Breaking Benjamin
125 – R&B/soul
126 – Rock instrumental
127 – Urgent by Foreigner
128 – Vertigo by U2
129 – Wheel in the Sky by Journey
130 – Won’t Get Fooled Again by The Who
131 – Klein Mandelbrot by Blue Man Group
132 – Drumbone by Blue Man Group