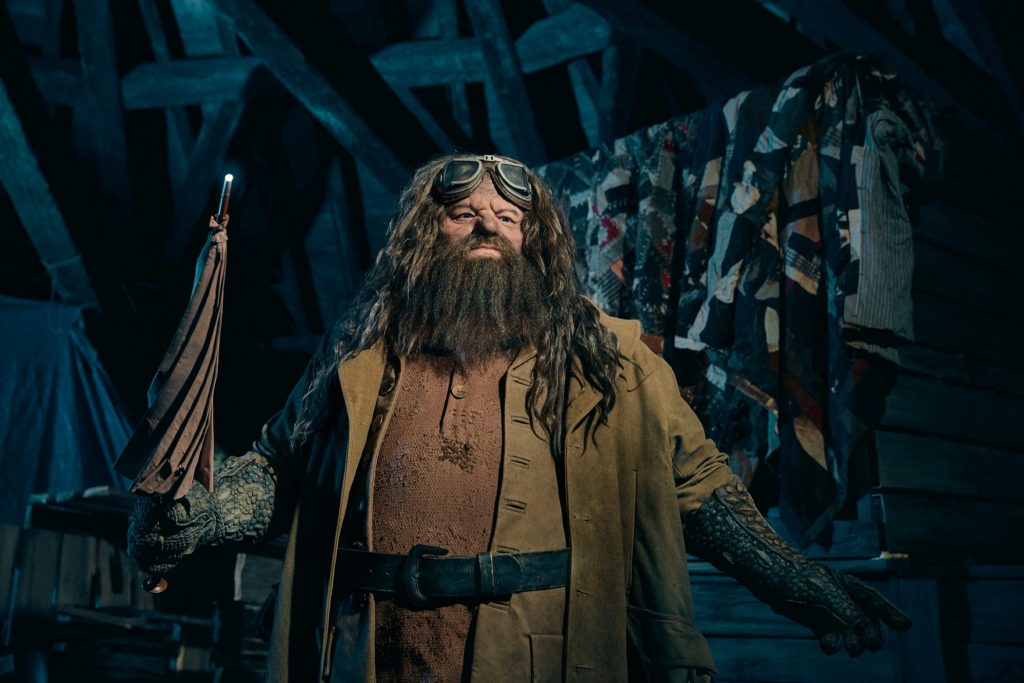 On June 13th, Universal’s Islands of Adventure unveiled its newest addition to the ever-popular Wizarding World of Harry Potter—Hagrid’s Magical Creatures Motorbike Adventure. This new attraction is a wild roller coaster experience that puts you in the heart of the Forbidden Forest and face-to-face with some of the most infamous creatures in the Harry Potter series.

A few weeks ago at the time this article was written, I experienced this one-of-a-kind roller coaster not once, not twice, but three times. There is plenty to dive into, so let’s get started. This review will be broken down into three sections: Queue, Ride Experience, and Overall Opinion. I will also discuss some handy tips for those who have not been on the ride as of yet.

Our journey begins just past the stone archway in Hogsmeade facing the Forbidden Forest. Just as you enter the outdoor portion of the queue, you may be lucky enough to see a train full of ‘flying’ motorbikes roar past you, which makes for a truly great entrance. The first section of the line is outdoors and winds up through several switchbacks. Once you reach the top, it gives you a great photo opportunity of the coaster track and the surrounding ruins.

You continue along the path and get a picturesque view of Hogwarts before you wind up at Hagrid’s hut. This section of the queue is still outside but is more secluded than before. There are tons of detailed props in this area, including a pumpkin patch, gardening tools, and old lanterns, signs of Hagrid’s recent projects. The queue then faces a large dilapidating ruin covered in moss and overgrowth. The rest of the journey begins inside.

This building was once home to the Dueling Dragons/Dragon Challenge queue, and while it does share some similarities in layout, Universal took a lot of time retheming it to fit the new attraction. Some eagle-eyed guests may notice a worn out mural on the wall sporting a red and blue dragon with the words ‘Dueling Club’—a subtle nod to the old attraction. Right off the bat, guests away into a large preshow room.

Using the same hyper-realistic projection technology found in other Harry Potter attraction preshows, Hagrid and Arthur Weasley explain that we are all here for a Care of Magical Creatures class. Hagrid needs to take us to the edge of the Forbidden Forest, but instead of walking there, he has Arthur duplicate the famed enchanted motorbike and sidecar so we can all ride together. The motorbike, which is infamous for its malfunctions, doesn’t seem to handle the duplicating process well and sputters into a fireball, setting fire to the stage. Arthur uses a water spell to put the flames out, and in the process, drenches guests (that effect is very startling).

After the preshow, guests enter a narrow switchback room that has all kinds of different creatures within it. There is a shelf with various eggs, a massive fire crab shell, amongst other things. This room is also pretty unique for its large windows on one side. Although this room is actually indoors, the windows give off a convincing natural light effect. The next section of the queue does not have too much theming as it is the same long natural rock tunnels that were once part of Dragon Challenge. After a few long and winding tunnels, we arrive at Hagrid’s lab. This room has all sorts of notes and sketches for various creatures Hagrid has been studying. It also has a workbench with some Hagrid-sized gloves on top. There is a crazy amount of detail in this room, and I wish I had been in there longer to appreciate it all.

The final room is a giant switchback area with very high wood slat ceilings. This room has a projection effect that gives the impression a motorbike is roaring overhead. There are a few different variations of the projections, so you may encounter different ones if you ride more than once. Right before you reach the coaster station, a team member will ask you to stand in pairs (the person on the right will get the motorbike seat and the person to the left will get the sidecar seat). We will get into the difference between the two seats shortly, but this is the final step before beginning the ride.

I was fortunate enough to get front row on my very first ride, so I had a clear view of everything that was happening. This coaster does not have a traditional lift hill; it instead uses magnetic fins to propel the vehicles along the track. From the outdoor part of the queue, this coaster looks quite sluggish, but that is not the case when onboard. This thing packs a punch, and that is the case almost immediately out of the station. After a small slalom style drop, the ride hits launch number two and really picks up speed. There is then an airtime hill that puts you right by the ride’s entrance prior to arriving at a large hut-like structure. When inside the hut, you encounter Hagrid, who is fending off the fireball of a Blast-ended Skrewt (both of them are animatronic, which is a nice touch). Due to the situation, Hagrid tells us that class is canceled. Following this scene, the ride vehicles exit the hut and come to a worn-down stone bridge.

The motorbikes take on a life of their own and go through the third launch, which sends you flying through the window of a massive ruin and down a curved drop. This is where the ride really kicks into high gear. There is a curved section over a lake that is rather intense and reminds me of the high speed turns of Cheetah Hunt at Busch Gardens Tampa. The acceleration in this section picks up again with another launch that wraps around trees and rock work. Hagrid tells us to hang on through the onboard speakers just as the coaster slows down in front of a life-sized animatronic of Fluffy (the three-headed dog). The ride vehicle then rounds the corner and faces a cave with Arthur Weasley’s car lodged on top, launches downward, and goes up a near-vertical spike. Sitting in the front row, it is quite startling as you cannot see this spike coming from any part of the ride.

After a brief realization that you are several stories up in the air, the train free falls backward and into a sixth launch. If you decide to look backward, especially in the last row, you get an appreciation for how fast this coaster goes. The train continues backward and winds up inside a massive cave. The motorbikes come to a stop in a cramped cavern and Hagrid informs us that we have been entangled in Devil’s Snare, a vine-like plant in the Harry Potter universe that strangles its prey. Hagrid tells us to repeat a spell after him, which emanates a blinding white light (the snare’s weakness). The snare releases us and drops the track straight down in total darkness. For those who haven’t done a freefall track before, it can be startling and it somewhat gives that butterfly in your stomach feeling. Now at the bottom of the cavern, we discover some more Skrewts that have been hiding from Hagrid; they proceed to blast us with a fireball. The coaster then leaves the cave, hitting the seventh and final launch, which catapults the train to the ride’s top speed of 50 miles per hour. Of all the launches on this ride, this is by far the best and craziest one; it certainly feels much faster than its reported speed. The bikes go flying through a few banked turns before the coaster reaches the final brake run. Before the train returns to the station, we see a unicorn and foal animatronic tucked away in the ruins. This is a perfect ending to a wild ride.

Hagrid’s Magical Creatures Motorbike Adventure is, without a doubt, my new favorite attraction at Universal Orlando. I know that may seem like ride favoritism, but I can assure you it is not. This coaster has everything you would want in an attraction: high-speed, unbelievable theming, detailed animatronics, and a solid storyline. Those are all the same reasons why Revenge of the Mummy has been my favorite for years. This being a much more thrilling coaster is what puts it on top for me.

Having gone on the ride three times, I did get to try the two different seats, and I personally prefer the motorbike; however, besides it being higher up on the track than the sidecar, there aren’t too many differences. I also highly recommend this ride at night. There are little to no lights on the track so it feels nearly pitch-black, especially around the dense trees, further immersing you in the storyline. Despite the speed and a few intense elements, this coaster is perfect for the whole family, while still providing adrenaline junkies a good amount of thrills. I cannot recommend this ride enough, and I definitely suggest you ride it as many times as possible on your next visit.

I decided to include a few tips for planning a trip on Hagrid’s Magical Creatures Motorbike Adventure as it is an insanely popular attraction. For those concerned about metal detectors, there are none on this ride (at the time this was published). There are two locker stations on either side of the entrance if you need to store any bags, purses, etc. There is a test seat at both the queue entrance and before the coaster station if you want to see which seat is best for you. The motorbike seat seems to be the one that best accommodates larger guests, but if you aren’t sure, just sit in the test seat and pull the lap bar down. If the light turns green, you’re good to go.

As of the this article was written, the attraction does not have an Express line. There are only the regular queue and a single rider line. In the future, there will likely be Express access, however. Since you have to wait in a regular line, you may be wondering what the wait times are like. When I went on the ride, each wait time was posted at 180 minutes. The first time, there was a lightning delay (since the ride is mostly outdoors, it does not operate in stormy weather). The delay pushed us back to just under three hours. I went on again that same evening, and while the wait said 180 minutes, I was on and off in about an hour. The final time was more luck than anything as the ride was experiencing technical delays and I sat outside the entrance until it reopened. In that scenario, I was on and off in about 25 minutes. I suspect that the park does overestimate wait times slightly, but my suggestion is you ride the roller coaster early before summer afternoon storms roll in and close the ride. Also, the ride has been going through quite a bit of early ride hiccups, and as of right now, the attraction opens with Islands of Adventure but closes well before the park’s closing time to allow crews to do daily maintenance. Night rides will be hard to come by for now, but this operating schedule will change over time.