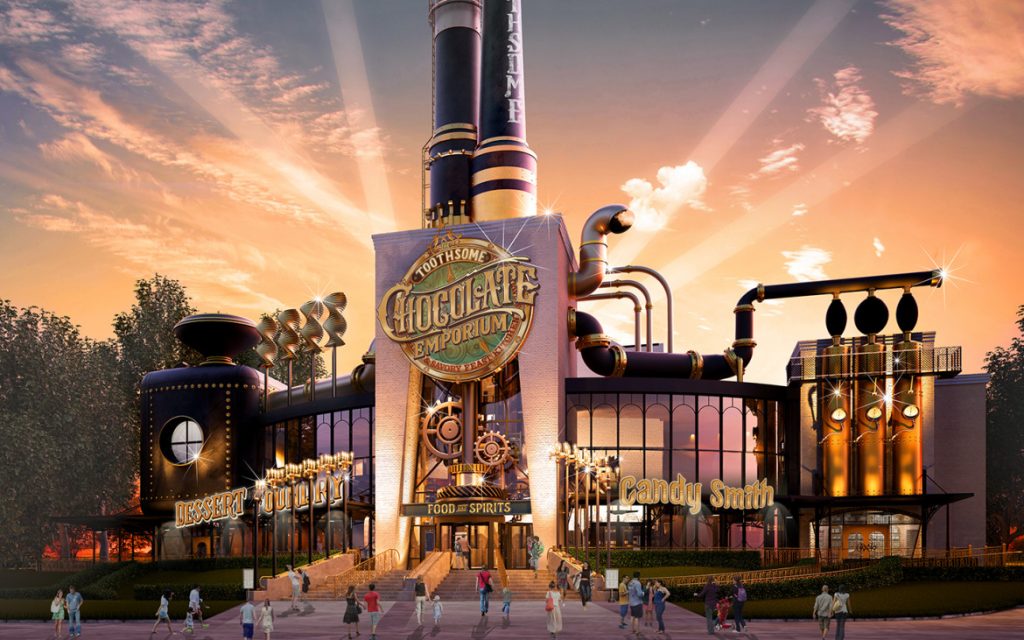 After months of rumors and speculation, Universal Orlando officially announced the replacement for the now defunct NBA City Restaurant. Toothsome Chocolate Factory & Savory Feast Emporium arrives as the most unique establishment in all of CityWalk. The minds at Universal Creative have developed a rather interesting mix of themes and food items into one  place. Toothsome transports you to a 19th-century Steampunk era chocolate factory, adorned with smoke stacks, quirky interiors, and a fully immersive themed experience.

The most important aspect of the Chocolate Factory is, of course, the menu. Universal has devised a menu comprised of unique takes on classic food like steaks, seafood and pasta entrees. They also promise gourmet burgers, sandwiches and even all day brunch. What’s a chocolate factory without some chocolate? The multitude of dessert options will certainly have guests  coming back for more. Some of the options include milkshakes like Chocolate x5 (chocolate spirals, chunks, ice cream and whipped cream), more wild creations like Bacon Brittle (bacon ice cream, bacon caramel and chocolate covered bacon), and savory classics like the Red Velvet milkshake. If that wasn’t enough, Toothsome will also allow guests to watch chocolate creations  be made right before their eyes. The factory also features its own retail shop where guests can take home some of their own chocolate to enjoy.

Toothsome Chocolate Factory is sure to be another fine addition to Universal’s impressive lineup of food and dining experiences. The old NBA City Restaurant was beginning to show it’s  age and was more than likely to be replaced down the road. Currently, construction has been rather slow (only the area where the new entrance will be has begun taking shape), but now that the official announcement was made, work should pick up in pace sooner rather than later. Although there is no official opening date in Universal’s press release, we expect this project to have a similar construction timeline and opening date as CityWalk’s latest addition, the NBC Sports Grill & Brew, which would put it at fall. We will continue to update you on the progress of Toothsome Chocolate Factory as more updates occur.