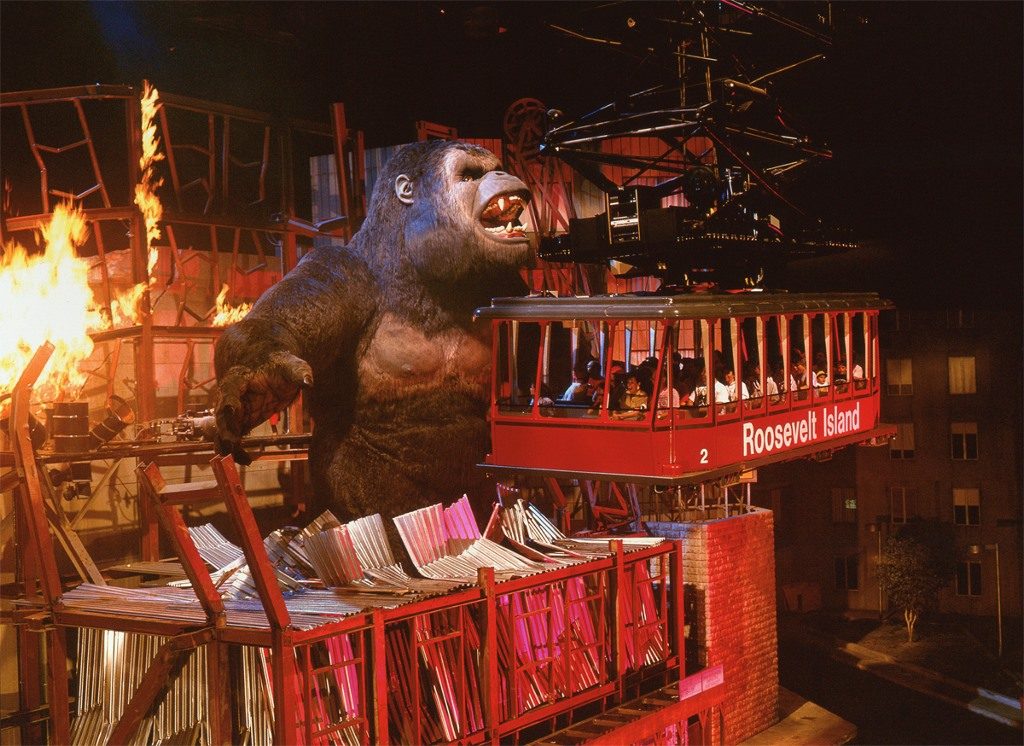 Back to the Past: Kongfrontation

Welcome back World Of Universal fans to our new entry in the “Back To The Past” series. In this series, we will review the history of rides and attractions in the Universal Studios theme park chain and show the transformation from opening day to what guests can experience at the park right now. Today, to keep up with the hype surrounding Skull Island: Reign of Kong, we will go back to the original Kongfrontation attraction that once was a focal point of Universal Studios Florida. The legacy of this ride has had a profound effect on future rides at the park and has some influence in the new Kong experience coming this summer.

Concept
In much the same way as JAWS, Universal first unveiled their King Kong attraction as part of the Studio Tour in Hollywood. Riders of the Studio Tour would find themselves stuck in the middle of New York City during Kong’s escape and come face to face with a truly groundbreaking animatronic of the ape himself. Building off the success of Hollywood, Universal took their tram sequences and fleshed them out to full scale rides at their Florida theme park. Universal Creative designers chose to make the park’s attraction marquee right in the heart of a miniature New York City. World famous director Steven Spielberg was enlisted to help with many of the opening day attractions in the park and Kong was no different. On June 7th, 1990, Kongfrontation opened to the public.

Ride Experience
The entrance to Kongfrontation looked nearly identical to the museum facade that is currently in the park today for Revenge of the Mummy. Guests would enter a mock up of the Pennsylvania Station in New York and walk through a queue made to look like a subway. Once at the station, park guests would board an open air suspended tram similar to the ones found in the real life Roosevelt Island. With a tour guide in hand, the ride would traverse an enormous indoor set made to look like the streets of a New York borough. To make the city setting appear as realistic as possible, fifty facades were modeled after Manhattan’s Lower East Side circa 1976 (since the ride was based off the most recent King Kong film at the time). The tram’s radio was tuned to the police emergency frequency so that guests could be informed of Kong’s location in the city. After a few fiery special effects, the trams would round the corner to the Queensboro Bridge, where the mighty ape himself was hanging over the guests. Kong would pound the roof of the cable car as it made its way across. The finale of the ride featured the largest of the two animatronics in which the car was being “picked up” and subsequently “dropped” as the guests made their escape back to the unload station.

Ride Issues
Like many of the attractions in the park, Kongfrontation had its fair share of breakdowns. This was mainly due to the two apes on the ride itself. According to Universal, the King Kong animatronic figures that were built for the attraction were scaled to be 39 feet tall with an arm span of 54 feet. The one used for the “street sequence” weighed approximately 13,000 pounds, while a lighter figure, that weighed approximately 8,000 pounds, was used for the “bridge sequence” of the ride. The sheer size and power of the robots caused most of the breakdowns for the ride; Universal had a major issue to face. Kongfrontation was one of the most iconic attractions in the park, drawing huge crowds but at the same time, problems with ride tech kept operations limited. Despite trying to fix the ride by limiting special effects and Kong’s movements, the park decided it was too expensive to maintain and it was best to move on from their prized attraction. Kongfrontation closed on September 8th, 2002.

Post Kong
Shortly after Kongfrontation closed, Universal Orlando began construction on its replacement — Revenge of the Mummy, a state of the art indoor roller coaster. All of the New York city interior was leveled to make way for the large speed sections of the Mummy, and the facade was transformed into the museum of antiquities from the first Mummy film. On May 21st, 2004, Revenge of the Mummy opened to the general public with a grand ceremony hosted by Brendan Fraser, the actor who played Rick O’Connell in the Mummy films. As with most park projects that replace old attractions, Universal likes to keep a hint or two to remember the past. In the queue for Mummy (now an ancient tomb rather than a subway), sharp-eyed guests can spot banana hieroglyphics adorning the walls. The most famous Easter egg to Kongfrontation lies in the treasure room sequence of the ride. When the lights shine in the room, revealing a mass of gold and treasure, on the left hand side a small gold statue of King Kong can be seen high up in the corner. One hint to the old ride that guests cannot see is the original track that held the cable cars up from the ceiling of the soundstage. Remnants of the old track are still attached to the ceiling in the dark speed sections of the Mummy. Fortunately, after many years of being nonexistence from the parks, the ‘King’ has returned.

Reign of Kong
A few years ago, after the success of the Kong 360 3-D attraction in Hollywood, rumors swirled about Kong making a come back to Orlando. Those rumors were fueled even more when Universal began construction on a mystery attraction adjacent to Jurassic Park in Islands of Adventure. Then on May 6th, 2015, Universal announced that King Kong would finally be returning to Universal Orlando in the summer of 2016 with the opening of an all-new attraction at Islands of Adventure called Skull Island: Reign of Kong.

Although this ride is far superior in technology and is now set in Kong’s home rather than New York, there are still some similarities to Kongfrontation. The ride vehicles are more or less the same tram style (albeit this time an off-road truck) with a “driver” and Universal just announced that a massive three-story tall animatronic Kong will be featured on the ride, a callback to the classic finale of the old ride for sure.

Even though Kongfrontation closed more than ten years ago, it’s influence on Universal is quite interesting. The ride paved the road for large-scale animatronic figures and was certainly an influence for figures like the Yeti at Disney’s Animal Kingdom and even the T-Rex at the end of Jurassic Park River Adventure. More than that, Kong was the headline attraction for Universal Studios Florida when it opened to the public and now all these years later, Kong will change the landscape of theme park attractions and once again reign supreme at Universal Orlando.