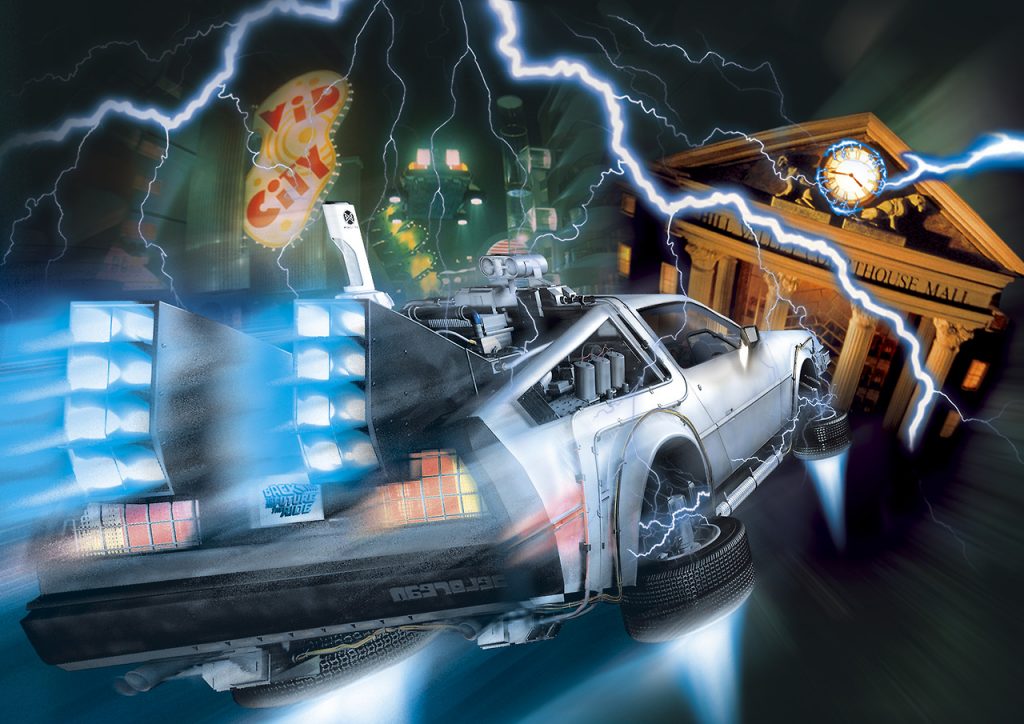 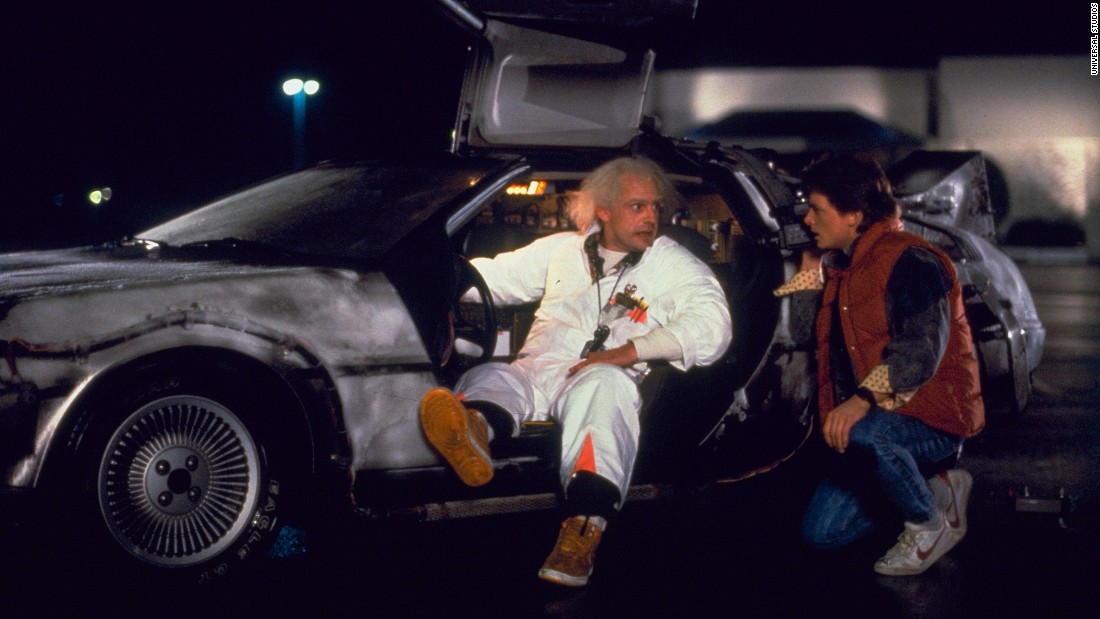 Concept
Guests started off by entering a structure themed as the Institute of Future Technology. Prior to the actual ride experience, guests waited in a queue that housed numerous televisions playing different clips. Eventually, guests were divided into separate lines that led to various levels. When the line advanced, guests entered the building and were split into different lines. Here, television screens showed Biff inside the Institute attempting to stealing the DeLoreon time machine and Doc Brown explaining what the time machine was capable of. Afterward, each line was directed into different rooms where they were shown a video of Biff stealing the DeLoreon and Doc Brown explaining how to assess the situation; following this was a safety video. After guests viewed the video, they were placed into a small room with a DeLoreon vehicle (the building contained numerous amounts of these rooms on different levels). When the ride was set to begin, all of the vehicles lifted above, where an Omnimax domed projection screen was revealed. The screen projected the ride’s pre-recorded “film,” and all vehicles moved in sync with the actions on screen using hydraulics that provided swift and jarring movements. When the experience concluded, the vehicles then lowered into the room where guests boarded.

Universal designed the Back to the Future ride to immerse guests into an original storyline with the use of simulation and screens.

According to reports, a roller coaster rather than a motion simulator was the original concept for this ride; however, this concept was ultimately dropped because it supposedly lacked the ability to have a complete storyline due to fast speeds. Ride Experience
Guests were invited to the Institute of Future Technology as volunteers to test Doc Brown’s DeLoreon time machine. The test, as explained in the preshows, were supposed to travel guests one day into the future; however, these plans changed when it was discovered that Biff was inside the Institute and stole the DeLoreon time machine and trapped Doc Brown. As a result, guests were asked by the Doc to assist him in stopping Biff and recovering the DeLoreon. In the preshow, Doc Brown told guests to the use another DeLoreon to track Biff. Upon boarding the DeLoreon, the vehicle then started and accelerated, sending guests off to find and stop Biff. Throughout the ride, guests flew from 2015 Hill Valley through an Ice Age avalanche, into the clutches of a dinosaur and back to the future, all to stop Biff from altering the future.

End of Time Traveling
On March 30, 2007, Universal Orlando officially closed its wildly popular Back to the Future ride, after about 16 years of operation. On May 15, 2008, Universal Studios Florida opened The Simpsons Ride in its place, and the park later rethemed a section of the World Expo after Springfield, though this wasn’t completed until 2013.

The Simpsons Ride uses the exact same structure layout and ride technology as Back to the Future. To theme the new ride to the Simpsons, Universal repainted the building, replaced props, changed the DeLoreon ride vehicles to coaster vehicles, and made various other slight changes. In addition to this, the park also updated the attraction with a replacement projection system as well as new hydraulics. The Simpsons Ride takes guests on a new roller coaster ride at the Krustyland amusement park, but this goes wrong when Sideshow Bob gains control of the park and changes it to a killer coaster that ends up crashing through the park and sending guests through Springfield and into space. Those familiar with the Back to the Future ride and Simpsons ride will find that the two attractions both have similar conflicts in that a villain breaks in and attempts to change the original test/experience for guests. As an Easter Egg, Universal included Doc Brown in the pre-ride video sequences, showing him trying to save the Insitute of Future Technology.

A Legacy and a Success
Back to the Future: The Ride was a simulator attraction that was built on a massive scale using technology that gave the impression that riders were actually a part of the action. For this reason, it remained a popular attraction to both new visitors and continuous visitors during its more than decade-long operation. In fact, many argued that the ride saved Universal Studios Florida after its disastrous 1990 opening that left visitors complaining because of broken attractions by giving tourists a reason to visit. This ride promised a great experience that was unique based on a well-known series, and it delivered this promise successfully.

Though the ride no longer exists at Universal Orlando or in any Universal theme park, it will forever remain a legacy for its ability to bring the Back to the Future series to life and for its capability of creating such a realistic, fun, and thrilling experience using hydraulics and a screen. Now, the ride will live on only in our memories.

Watch the Back to the Future ride: